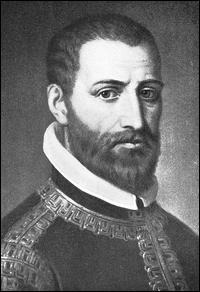 Tomás Luis de Victoria (1548-1611) should undoubtedly be considered the most significant Spanish composer of his time. He exclusively devoted his life and creative energies to the Catholic Church, and became one of the leading musical figures of the Counter-Reformation.

Born around 1548 in the city of Ávila — a medieval walled settlement located in the autonomous community of Castile and León — Tomás and his six siblings quickly fell under the spell of the Spanish mystic and Carmelite nun Saint Teresa of Ávila. Not surprisingly, Tomás was enrolled in the school of St. Giles, a Jesuit boy’s school praised by St. Teresa for its outstanding religious and musical education. When his father, the cloth maker Franscisco Luis de Victoria unexpectedly died in 1557, his uncle became his legal guardian. At that time, Tomás already was a choirboy and an accomplished organist at Ávila Cathedral. Showing exceptional promise as a theologian and musician, Tomás obtained a grant from the Spanish King Philipp II to study in Rome, where he arrived in 1565. He became a scholar and cantor at the Roman Jesuit seminary, also called the “Collegium Germanicum”, founded by Saint Ignatius of Loyola. Giovanni Pierluigi da Palestrina, who served as the music director of the chapel, and the spirit of the Counter-Reformation, dominated life at the Collegium. Apparently, Tomás studied with Palestrina and both composers eagerly implemented the musical directives issued by the Council of Trent. This special council of Catholic clergy, which convened in the northern Italian city of Trent between 1545 and 1563, was charged with formulating reformist policies that addressed problems in the church. Condemning Protestant heresies and defining its own teachings, the council also addressed the proper use and function of music in the liturgy, which included clarity of text declamation, dignity of expression and the adherence to the rules of counterpoint. In 1571, Victoria was appointed as the successor of Palestrina as music director of the Collegiate’s chapel, and for the next 14 years, he exclusively composed religious music.

Requiem Mass (1605)
With a book of motets for four, five and six voices, Victoria began to publish his music in 1572. Most notable are the settings of “O quam gloriosum” and “O magnum mysterium”, written for the feasts of All Saints and the Circumcision, respectively. These early efforts are highly personal compositions displaying a wide range of expressive intensity and joyous radiance. His reliance on vivid chromatic colours and the use of dynamic contrasts proved immediately popular, and both motet settings quickly spawned parody masses of the same name. In 1575 Victoria was ordained to the priesthood, almost paradoxically by the last living member of the pre-Reformation English Church hierarchy, Bishop Thomas Goldwell. He actively served as priest at St. Girolamo della Carità, and concurrently was appointed Maestro di Capella at St. Apollinare. Between 1581 and 1585 he published five volumes devoted to hymns, Marian works, Masses, Holy Week offices, and motets. The most significant composition to emerge from these publications is the “Tenebrae Responsories”. Detailing the story of the Passion in music, Victoria fashions 18 pieces adhering to the customary alternation of verse and refrain. This moving and dark setting also suggests, that Victoria, despite his personal and professional successes in Italy, was eager to return to his Spanish homeland.

To this effect, he petitioned King Philip II, who immediately named him the personal chaplain to his sister, the Dowager Empress Maria of Austria, and Victoria returned to his native Spain in 1587. He immediately secured musical employment at the prestigious Seville and Saragossa Cathedrals while concurrently seeing to Maria’s spiritual needs. After the death of her husband, Maria retired into the imperial convent of the Minoresses, which was commonly referred to as the house of the “barefoot Royals”. Obediently, Victoria followed the Empress and attended not only to her personal religious needs, but also served as the music director and organist of the convent’s chapel. In all, Victoria served Maria for 17 years. When the Empress died on 26 February 1603, the celebration of the solemn royal funeral rites was held in Madrid, and Victoria supplied his sublime and moving “Requiem Mass”. Victoria remained in the chaplain’s residence, and he published his last work, the “Officium defunctorum” in 1605. He peacefully died in 1611, and he was buried without any ceremony at the convent.

Please click here to read about “The Golden Age of Spain in Music, Arts and Architecture”.