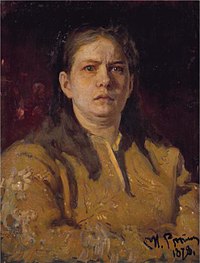 Portrait of Valentina Serov by Repin

Valentina Semyonovna Bergman (1846-1924) was born into a Russian merchant family of German-Jewish descent. Her parents converted to Lutheranism before she was born, and they operated a successful shop specializing in colonial wares. Valentina showed great musical promise from an early age, and she was awarded a scholarship to study piano with Anton Rubinstein at the St. Petersburg Conservatory. She quickly became known for her remarkable improvisations, and when the composer Alexander Serov (1820-1871) heard her skillful renditions, he apparently remarked, “Too bad, you’re not a boy!” Valentina wasn’t willing to take his insult and replied, “And why can’t a girl be a composer?” To prove her point she left Rubinstein’s piano studio and studied composition privately with Serov. Professional counterpoint quickly turned into a personal duet of love. Having successfully premiered his first opera Judith and thereby significantly improved his financial position, Serov asked to marry Valentina in 1863. And to his great relief, having been assured that she was indeed a girl, she gladly became Valentina Semyonovna Serova. 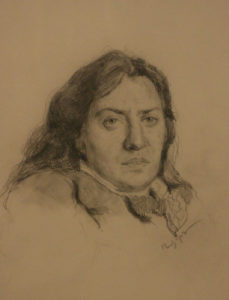 Portrait of Valentina Serov by her son Valentin Serov

The Serov’s set up an artistic salon that attracted a good many visitors, including Fyodor Dostoyevsky and the young Pyotr Ilyich Tchaikovsky. Serov was a man of strong opinions and he loved to attack the teaching at the Conservatory. Tchaikovsky had just completed his course at the Conservatory and Serov’s diatribe was clearly directed towards him. As Valentina later wrote, “I don’t remember what impression all these stormy harangues made on him; he had just completed his course at the Conservatory; with his frank and youthful eyes he looked on timidly at his host during these heated perorations, and, although he did not say one word of protest, it was clear that he did not agree with Serov… Wrapped up as he was in an attentive silence, it was difficult to look into his soul, although his pleasant appearance and especially the sweet expression of his eyes could not fail to awaken the sympathy of anyone who was endowed with the slightest sensitivity. While we were having tea Tchaikovsky walked up to the piano and absent-mindedly ran his fingers over the keys… I approached him in a brisk and bold manner, with the carefree self-confidence so characteristic of a young, not quite mature person, and asked him in a defiant tone: Tell me, what are your ideals in music, Pyotr Ilyich? He looked at me with that clear glance of his which was marked by an almost childlike naivety, and added firmly and distinctly: I have no ideals!” 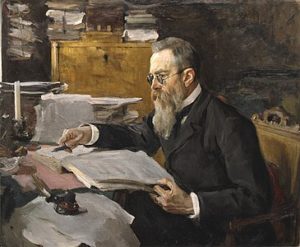 Portrait of the composer Nikolai Andreyevich Rimsky-Korsakov
by Valentin Serov

In January 1865, Valentina Serov gave birth to their son Valentin. In time, he was to become one of the premier portrait artists of his era. Known for painting the psychologically pointed characters of his subjects, his favorite models were actors, artists, and writers among them Nikolai Leskov and Nikolai Rimsky-Korsakov. Besides raising a son, Alexander and Valentina were busily writing music criticism. In 1867/8, they co-published a book on music and theatre entitled Muzïka i teatr, which included her earliest writings on music. Alexander Serov unexpectedly died of a heart attack in January 1871, leaving his latest opera The Power of the Fiend incomplete. Since the work was scheduled to premiere in the late spring, Valentina, with assistance from Nikolay Solovyev completed the score. She used her husband’s sketches and her memory of what Alexander had played to her at the piano to compose the final act. The opera did premiere in April 1871, but it was initially not successful. 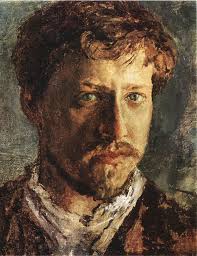 Her work on completing the score to The Power of the Fiend revived her interest in composition and resulted in four original operas. Before the premiere of her first opera Uriel Acosta in Moscow in 1885, she contacted Tchaikovsky. Tchaikovsky played it through and found it full of awful and clumsy harmonies, and he blamed her late husband who had rejected any formal training in composition. Apparently, Valentina asked Tchaikovsky for some lessons in harmony, but he recommended Anton Arensky instead. Her second Opera Marie d’Orval was composed during the 1880s and is set in the French Revolution. Il’ya Muromets is based on a Russian heroic tale, and it was successfully staged in Moscow with Feodor Chaliapin in the title role in 1899. Her last opera Vstrepenulis relates to the political unrest of 1904/5, but it was never performed. Following in the footsteps of her husband, Serova wrote music criticism for over half a century, and she vigorously promoted music education among the people. Valentina Serova died in Moscow on 26 June 1924.