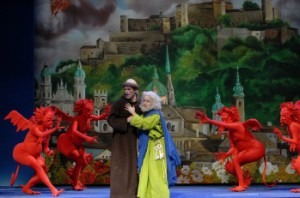 Sigismund von Schrattenbach was Prince-Archbishop of Salzburg from 1753 to 1771. He appointed Leopold and Wolfgang Amadeus Mozart as members of the episcopal court orchestra, but only after Wolfgang had passed a rigorous test! Schrattenbach had always been suspicious that young Wolfgang Amadeus Mozart was receiving compositional help from his father. To make sure that there was no paternal interference, Schrattenbach arranged for the young Mozart to be locked up in solitary confinement while setting the words of a short oratorio. It was on the strength of this setting—the recitative and aria “Or che il dover,” which was destined for the celebration of the Archbishop’s anniversary in December 1766, that young Mozart was commissioned to write the first part of a sacred musical play. Die Schuldigkeit des ersten Gebots (The Obligation of the First Commandment), was staged at the Benedictine University of Salzburg in 1767. The 11-year-old Wolfgang composed the first part, with the second and third parts contributed by Michael Haydn and Anton Adlgasser, respectively.

The Benedictine University of Salzburg had long cultivated spoken pedagogical plays that developed into an opera-like art form. Commonly referred to as School Dramas, these works consisted of a succession of recitatives and arias intoning Latin poetry, with the stage machinery based on Italian opera. The libretto for Die Schuldigkeit is attributed to Ignaz Anton Weiser, a businessman, councillor and eventual mayor of the city of Salzburg. The preface suggests “the purpose of the drama was not only to delight the mind but also to elevate the soul, as there is no more dangerous state for the soul than a lack of alacrity in the work of salvation.” It is not an overtly religious work, but more in line with the allegorical features of a musical mystery play. The play is set in a pleasant garden and adjacent woods. A “half-hearted Christian” has been seduced by “Worldliness” into a life of pleasure and glutton. Three allegorical figures, “The Spirit of Christianity,” “Divine Justice” and “Divine Mercy” are discussing his predicament. “Mercy” and “Justice” insist that they cannot help this man if he is unable to help himself, but “Christianity” is asking for more time, confident that he can convert this lost soul. We don’t know who wins in the end, because the second and third part of the composition has not survived.

Mozart’s music for the first part of Die Schuldigkeit is highly accomplished, especially considering that the boy was only 11! The characters are clearly differentiated, and “Worldliness” is singing arias of considerable virtuosity and difficulty. The orchestra plays an important role, with string textures enriched by the use of two separate viola parts. Mozart also included two flutes and a solo alto trombone in the scoring, providing variable textures and colorful instrumental timbres. The young Mozart responded pictorially to the text, with chromatically falling figures providing a deliberate musical description of “godless souls falling towards Hell.” Growling horns accompanied by scurrying strings depict “an enraged lion,” while orchestrally accompanied recitatives provide vivid depictions of “Christ’s” nightmare visions. To compare Die Schuldigkeit with the glorious operas of Mozart’s maturity is clearly misguided. Instead, this juvenile effort provides a fascinating insight into the genesis and development of the greatest opera composer of all times.

Wolfgang Amadeus Mozart: Die Schuldigkeit des ersten Gebots, K. 35
The Obligation of the First Commandment will be performed at the Lucerne Festival on March 21st 2015.