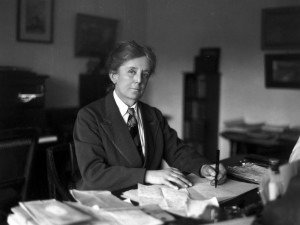 Ethel Smyth’s String Quartet in E minor has received considerable scholarly attention. Elizabeth Wood investigates the work as a representative of the struggle for women’s rights and Smyth’s involvement with the women’s suffrage movement. On the other hand, Jennifer Gwynn Hughes argues that the work represents Smyth’s discovery of her lesbian voice in music. What at first glance appears as opposing viewpoints focusing either on political reforms or personal sexual orientation is actually subsumed in Smyth’s belief that women were just as capable as men in their compositional endeavors.

George Bernard Shaw famously wrote to her, “It was your music that cured me forever of the old delusion that women could not do a man’s work in art and in all other things.” And the legendary conductor Bruno Walter considered “Ethel Smyth a composer of quite special significance, who is certain of a permanent place in musical history. Real musical productivity is so rare that we are entitled to ask whether the impression of originality created by these compositions is not attributable to their femininity…Yet in her case the sex question is comparatively unimportant in the presence of a talent so strong, thematic invention so original, and a temperament so deep and warm.” Following an obviously retrospective orientation, the range of musical allusions and citations in the String Quartet in E minor goes back to the Viennese classical period. Began in 1902 and completed in 1912, Smyth clearly attempted to place herself among the great composers of previous centuries, and to demonstrate to other female composers that this could be easily accomplished. As such, it is Smyth’s musical testimony that Brahms and Clara Schumann had been wrong all along!

Smyth, ignoring strong objections from her family, left England at the age of nineteen to study music theory and composition in Leipzig. While formal study at the Conservatory with Carl Reinecke was not to her liking, she did make important musical connections. For one, she privately studied with Heinrich von Herzogenberg, and her acquaintance with the composer George Henschel led her to a meeting with Brahms. Smyth writes in her autobiography, “To my mingled delight and horror I learned, too, that Henschel had actually spoken to him about my work, telling him I had never studied, that he really ought to look at it and so on; and after the general rehearsal this good friend clutched and presented me all unawares. At that time Brahms was clean shaven, and in the whirl of emotion I only remember a strong alarming face, very penetrating bright blue eyes, and my own desire to sink through the floor when he said, as I then thought by way of a compliment, but as I now know in a spirit of scathing irony, So this is the young lady who writes sonatas and doesn’t know counterpoint!” Brahms eventually read through some of Smyth’s work, but did not go out of his way to praise them. Rather, according to Smyth, he seemed amused but not impressed by attempts she made to appeal for his approval. Smyth’s quest to gain recognition as a composer was certainly not supported by Clara Schumann. In a letter to Brahms, Clara writes, “I am surprised at the progress she has made and even if she has no originality as a composer, I cannot help feeling respect for such ability in a girl.”

From the very first, “I had worshipped Brahms’s music, as I do some of it now,” Smyth wrote, “but there was nothing remarkable about him as a person.” Smyth took a particularly dim view of Brahms’s attitude towards women, “If they did not appeal to him, he was incredibly awkward and ungracious, if they were pretty, he had an unpleasant way of leaning back in his chair, pouting out his lips, stroking his mustache, and staring at them as a greedy boy stares at jam tartlets.” It is unknown whether Brahms and Clara knew of Smyth’s romantic relationship with Elisabeth von Herzogenberg—a woman Brahms had been deeply in love with only a couple of years earlier—fact is, they were not really interested in Smyth’s compositions. Placed within a historical study of old masters of the string quartet genre, the e minor string quartet, according to Amy Elizabeth Zigler is not “a representation of lesbian desire, but a masterwork by a seasoned composer. It discloses her struggles as a woman, and the power she recognized within herself as a composer.” Musically revisiting her personal experiences in Leipzig after almost five decades, Smyth decisively claimed her rightful place among the great composers of the genre.