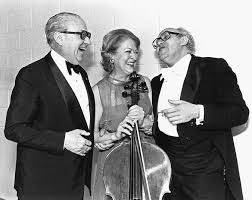 All great composers have one! And legacy composers have several! I am talking about biographies, offering basic facts about education, work, relationships, and possibly, analysis of the composer’s personality. Any detailed, scholarly or interpretive study of music starts with solid biographical information! While politicians and celebrities regale in penning autobiographies, or hire ghostwriters to do the work for them, composers generally wait patiently before they become subjects of biographical research. In the case of Alberto Ginastera (1916-1983), one of the most important 20th-century classical composers of the Americas, we are still waiting for this essential document on his life and works. As a result, there is very little information on Ginastera’s private life, but we do know that he married Mercedes de Toro on 11 December 1941, and that the union produced two children.

In her recently published memoirs, the composer’s daughter, Georgina Ginastera indicated that Mercedes and Alberto engaged in a number of artistic partnerships. Mercedes assisted in compiling and adapting the Pre-Columbinan poetry used in his Cantata para América Mágica of 1960. Ginastera publically recognized her ongoing artistic contributions in the dedication of his first opera Don Rodrigo (1963-64), “to my wife, companion and collaborator.” As Ginastera’s international career began to blossom, however, his wife’s role as assistant and collaborator significantly diminished, leading to increased marital tensions. According to their daughter, things come to a head when Ginastera began work on his second opera. “Mercedes had the original idea of adapting Manuel Mujica Lainez’s novel Bomarzo into an opera, and she spent a significant amount of time laying the groundwork for the first draft of the libretto.” Unfortunately, at the end she was left with two options: to fight with the author for her place as co-librettist, or accept the division of the rights between the author and her husband. An once “spiritual, passionate and impetuous relationship” degenerated into jealously and bitterness. Aggravated by an aggressive and restrictive political climate and severe health problems of their son Alexander, the couple separated in 1969.

Ginastera was devastated, and the breakup plunged him into a period of deep depression and three-year creative silence. It was the Swiss-Argentine cellist Aurora Natola, who “returned the joy of life and creation to Ginastera.” Actually, he had met Aurora nearly twenty years earlier. “By one of those strange coincidences which many times occur,” he wrote, “I won the first contest dedicated to composition with my String Quartet No. 1, opus 22 in 1948 and Aurora won the first one dedicated to interpreters in 1949. For the award concert, she asked me—at that time very respectfully calling me Maestro—if I could compose a work since the Argentine repertoire was very poor for cello. I thus composed Pampeana No. 2, op. 21.” They met again in 1971, and “seeing each other and liking each other was instantaneous,” wrote Aurora. Destiny “rescued us from our solitary and painful lives, to join us on a journey of light and hope.” They were married in a private ceremony in 1971 and settled in Geneva, Switzerland. Aurora became the focal point of his creative energy, and he found artistic ways of acknowledging her even in works not specifically for the cello. When Mercedes died in 1979, his daughter recounts, “We had the most heartbreaking conversation that I could have imagined. I have never seen him weep before and his sorrow was so afflicted and bereaved that I could not find words to comfort him.” Ginastera had not spoken to Mercedes for a number of years, and her death released him from a highly emotional chapter of his life. As a result, his music took on a new lyricism, re-engaging South American themes in a final synthesis of European avant-garde techniques, atonality, and pentatonic elements. And his Cello Concerto No. 2 is a large-scale musical reenactment and tribute to his love for Aurora. A ten-year anniversary gift for his second wife, it shows the dedication, “to my beloved Aurora, my companion and collaborator.”