Features
A Feast in the Time of Plague
A Brand-New Opera Written in Direct Response to COVID-19
by Frances Wilson September 3rd, 2020 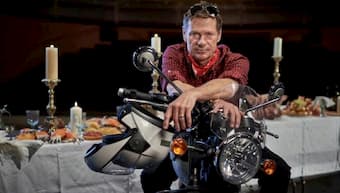 A Feast in the Time of Plague

A brand new opera written in direct response to the coronavirus crisis receives its premiere at Grange Park Opera (GPO) in September. Commissioned by GPO, with a libretto by director, producer and librettist Sir David Pountney, A Feast in the Time of Plague was composed by award-winning young composer Alex Woolf, and will be performed at GPO’s “Theatre in the Woods” to a live audience, under strict social distancing conditions.

Wasfi Kani, the indefatigable chatelaine and Director of GPO, is not someone who does things by halves; nor is she fazed by the not inconsequential issue of a global pandemic. And so, while other opera companies and concert halls have remain firmly shut during lockdown, Wasfi has been determined to keep the music playing, albeit via livestream rather than to a live audience. Having “lost” a whole season of opera to COVID-19, she created the “found” season at GPO – a series of 15 performances featuring some of the world’s leading artists whose diaries have been horribly empty since the spring, including Bryn Terfel, Roderick Williams and Pavel Kolesnikov. Performing from an empty opera house, the stage strewn with props from the productions which should have been, these recitals have not only offered online audiences music of the highest quality, but also an important reminder that, despite a global pandemic, “culture is active and happening right now” (Wasfi Kani). And in keeping with the spirit of GPO, where in a normal summer season opera goers can enjoy delicious picnics in the idyllic woods around the theatre, chef-patron and food writer Sally Clarke created a special picnic menu to be enjoyed at home while listening to the music.

This imaginative and pragmatic approach is typical of Wasfi Kani, whose energy and commitment has provided some 800 performers and support staff with much-needed work, while also allowing music to continue to be heard in the Theatre in the Woods. 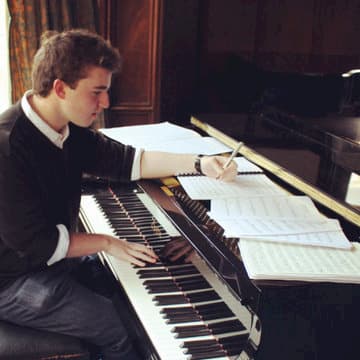 ‘A Feast in the Time of Plague’, an appropriate title for an opera in corona times, is based on a fragment by Alexander Pushkin of the same name. Pountney’s libretto is highly topical, with its direct references to coronavirus as well as other significant events of the modern era. Both libretto and score were written in record time (the score was written in just 6 weeks), and composer Alex Woolf’s job was made somewhat easier by the fact that the singers are accompanied by piano only, rather than a full orchestra. In addition, Wasfi Kani already had a number of singers in mind for the production, and so Alex worked on the music on a character basis, rather than as a through-composition. His approach was pragmatic, responding to the logistics and timescale involved. The spare scoring and staging ensures the safety of the cast and other staff. This is Alex Woolf’s second opera, although his first to be premiered, as the production of his first opera, ‘Pandora’s Box’, was postponed due to the pandemic.

In ‘A Feast in the Time of Plague’ 12 varied characters gather for a kind of “last supper” taken at a “very very long table – groaning with luscious delicacies” (Wasfi Kani). At a time when death stalks the land, the 12 characters decide that an extravagant feast is preferably to resigning themselves to their fate. Each character arrives voluntarily, but most of them depart involuntarily, i.e. they die. In between, they capture the surprising ways in which people have responded to the coronavirus crisis, revealing defiance, solidarity and the need to carry on laughing, even in the midst of tragedy. The cast includes Sir Simon Keenlyside, Welsh tenor Wynne Evans, well known to British tv audiences for his role in the adverts for insurance website, Go Compare, and Wagnerian soprano Susan Bullock, who has appeared many times at the Royal Opera House Covent Garden.

The Theatre in the Woods, GPO’s purpose-built opera house nestled in the arcadian grounds of West Horsley Place, normally accommodates an audience of 700, but for this new opera, numbers will be limited to just 250, allowing plenty of space around the invited audience members, who will be seated in household groups and private boxes. The opera will also be filmed and later streamed free of charge, allowing many other people to enjoy it.

‘A Feast in the Time of Plague’ is highly significant as it will be the first opera in the UK to be performed inside a theatre, and with an audience, since lockdown. For those who love the artform, and for the musicians and others involved in the production, this will indeed be a feast after more than 4 months of no live performances.

It is also an important “experiment” – to test whether it IS possible to present live performance safely with a socially-distanced audience – and at the time of writing, the UK government has “put the brakes” on any further opening up of society, including music venues. The significance of this performance, if it is allowed to go ahead, will not be lost on anyone who longs for a return to regular live performances: if successful it should encourage others to explore ways to bring live music, with an audience, back to our concert halls and opera houses.