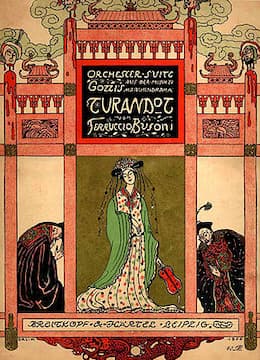 Several years before Puccini charmed the operatic world with his musical setting of Carlo Gozzi’s theatrical fairytale “Turandot,” Ferruccio Busoni completed his opera by the same name in 1917! As early as 1905, Busoni had composed incidental music for the theatrical play, which he subsequently published as the Turandot Suite. The fifth piece of this orchestral suite titled “Turandot’s Zenana,” became the fourth Elegy entitled “Turandots Frauengemach” (Turandot’s Chambers) in 1908. 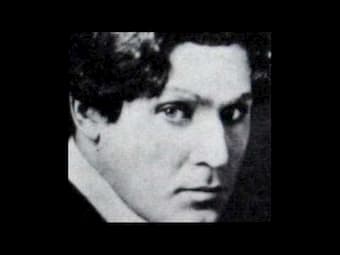 When Busoni published his Elegies, originally a set of 6 solo piano pieces, his compositional approach had undergone a fundamental change. He wrote, “My entire personal vision I put down at last and for the first time in the Elegies…they signify a milestone in my development, almost a transformation. These pieces have not been composed as a rejection of anything that is already there, but in order to recreate that which already exists.” 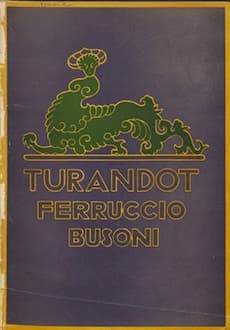 Ferruccio Busoni (1866-1924) was not only one of the most visionary musicians of the first half of the twentieth century; he was universally regarded as one of the finest pianists of his time. As such, “Turandots Frauengemach” extends the harmonic language by weakening tonality with its use of bitonality. Steeped in modal harmonies with unrelated triads overlapping or juxtaposing, Busoni’s cunning transcription constantly uses the “three-hands-texture.”

This creates a musical fabric of rolling chords evocative of guitar or harp-like effects. Combining rare pianistic athleticism with Chopinesque refinement, Busoni created a thoroughly believable evocation of a legendary China. Critics, however, were not convinced. “Busoni’s elegies,” they wrote, “are a veritable source of dismay. There is a structural logic and an aesthetically ordered system of sound deployment in these pieces; but novelty seekers will have found as little ‘music’ here as the normal, naïve listener.”