It was the hot new instrument in town – eventually combining a seemingly traditional keyboard with the modern valve/tube technology developed in the first world war.

Maurice Martenot (1898-1980) developed his ‘Ondes Musicales’ (musical waves) instrument in 1928, first as a simple two-part instrument – the main instrument had a ‘pull-wire’ that was operated via a metal ring you wore on your right index finger and your left hand handled the controls on the other unit. There was a dummy keyboard with a moveable pointer above it to show where on the wire you were with the pitch. By the time of the third version in 1929, the two parts of the instrument were to be combined into one: the wire was replaced by a wire ribbon controller that you still controlled with the finger ring, and the dummy keyboard was just above the ribbon. The keyboard’s keys could shift to the left or right, permitting the pitch to have some microtonal variation and permitting the key to have a vibrato. The controls formerly located on a separate part of the instrument and played by the left hand were now incorporated into a drawer.

The left-hand controls are switches and potentiometers that govern articulation, dynamics, timbre, and other dimensions of sound. Development has continued on the instrument, resulting in a sixth version that was more compact (1953), a transistorized one (1974) and a digital one (1993). There are three styles of loudspeakers, each of which has a different function: the palme (sympathetic strings), the diffuseur métallique (tam-tam) and the diffuseur à ressorts (stretched coiled springs). 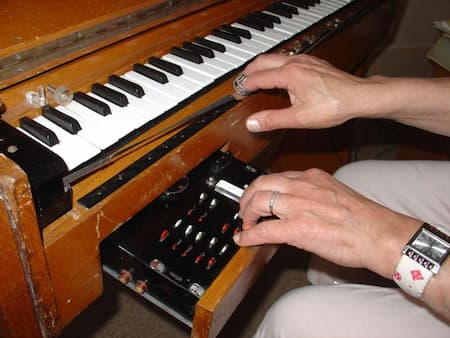 The ondes martenot appears in more than 700 orchestral compositions and in a lot of film music, most by French composers. Composers such as Honegger enthused over it, particularly when it could be used to replace instruments that they disliked – such as the double bassoon, which Honegger called ‘those gloomy stove-pipes looming up in orchestras.’

Edgard Varèse used the instrument to substitute for sirens in a 1929 performance of Amériques and replaced his earlier use of two theremins (another early electronic instrument) with the more precise ondes martenot when he revised Ecuatorial.


Olivier Messiaen was an enthusiastic adopter, using six of them for his Fête des belles eaux (1937), written for the fireworks and light shows held along the Seine during the 1937 Paris International Exposition. 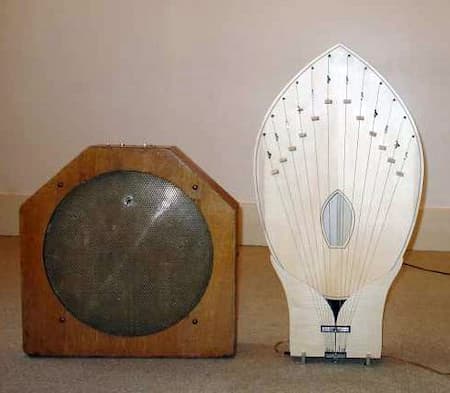 When Messiaen used the instrument in his 1940s works Trois petites liturgies de la présence divine (1943–4) and the Turangalîla-symphonie (1946–8), he was using the instrument in the latter piece to augment the human voice to give it ‘a goddess-like’ presence without the limitations of a singer in terms of range or power.

The first ondes martenot concerto was written in 1947, shortly after Martenot himself started giving classes in the instrument at the Paris Conservatoire. André Jolivet had his ondes martenot concerto commented on by fellow-composer Edgard Varèse as being ‘of a very particular orchestral colour and of an extreme eloquence in the most striking passages.’


We call 1937 ‘the year of the ondes martenot’ because of the number of compositions created for the Paris International Exposition of that year that used the instruments. In the evenings, all along the Seine, pre-recorded music was played through speakers next to and on a one-kilometre stretch of the river (from the Pont des Invalides to the ile des Cygnes) to accompany the Fêtes de la Lumiere.

As you can see from the need to use multiple ondes martenot, despite having a keyboard, the instrument couldn’t produce multiple pitches at once as a piano does; it’s more like a woodwind instrument, producing only one pitch at a time.

The ondes martenot was also used in films, particularly science fiction and horror since its earliest days. Honegger used it for film music as early as 1934, it was used in the ballet music for The Red Shoes (1948), by Maurice Jarre in Lawrence of Arabia (1962). Jarre had been an ondist early in his career. Hollywood composer Elmer Bernstein used it in many films, including Ghostbusters (1984) and My Left Foot (1989). Danny Elfman used it in Mars Attacks! (1996), replacing the theremin he wanted to use because he couldn’t find a thereminist. Played by ondist Cynthia Miller, the ondes martenot is a common instrument in animated television sitcom The Simpsons.

After a flourishing set of works for the instrument written between the late 1920s and the 1960s, the instrument faded from interest, replaced by the synthesizer, which combined the electronic developments of the ondes martenot with the more traditional keyboard. However, the world of popular music brought the ondes martenot back into the limelight. The English group Radiohead has used single and multiple ondes martenot on their albums Kid A (2000) and Amnesiac (2001). The ondist Thomas Bloch has toured with Tom Waits, Damon Albarn (in his opera Monkey: Journey to the West), and ondist Chistine Ott created her 2020 avant-garde album Chimères completely on the ondes martinot. In the video you can see how she plays the instrument, using the ribbon and ring, the keys, and the left-hand drawer.

In his opera The Exterminating Angel (2016), English composer Thomas Adès used the ondes martenot to be the voice of the imprisoning force that keeps the dinner guests captive.

The MET: Live in HD 2018 – Excerpt from The Exterminating Angel

Performers have praised the instrument for being ‘the most musical of all electric instruments …’, noting that Martenot, himself an accomplished cellist, ‘wanted to use electricity to increase and control the expression, the musicality. Everything is made by the musician in real time, including the control of the vibrato, the intensity, and the attack.’

In a commentary in 2007, New Yorker critic Alex Ross wrote that one of the great problems with the ondes martenot was that there were very few virtuoso ondists and no place for the amateur player, i.e., performances of ondes martenot music required perfection and there wasn’t a pool of second- or third-rate players who could move up in the ranks.

The last ondes martenot was made by Martenot’s company in 1988, however, companies in Canada and Japan are creating new instruments to carry on his innovation. The ‘Ondéa,’ created in Calgary, Canada, says that it ‘is both a faithful reproduction of the original Ondes Martenot AND a further extrapolation of Maurice Martenot’s vision.’ Their facebook page shows many details of the construction of this always interesting instrument.