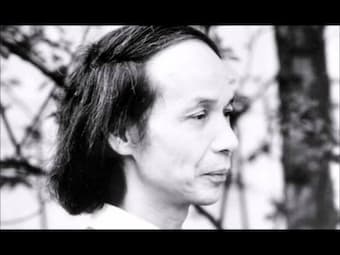 Commissioned by the British Broadcasting Corporation (BBC) for the clarinetist Richard Stoltzman and the BBC Welsh Symphony Orchestra, Fantasma/Cantos for clarinet and orchestra first sounded on 14 September 1991 in Cardiff. In this composition, Takemitsu imagined the orchestra as a Japanese garden designed for a circular walk. “As you enter the garden, you experience the stones, trees, water, and foliage from an initial vantage point. Moving along the circular path, you begin to glimpse the same elements of the garden from different angles until reaching a kind of halfway moment of calm and balance before proceeding again round the garden, ending at the very same starting point which is exactly the beginning yet now, seen again with the experience of the circular path, feels suddenly changed.” Fantasma/Cantos is part of a trilogy of works that belong to the composer’s “Garden Series,” the other works being Dream/Window of 1985 and Spirit Garden of 1994. As the composer explained, “I am a gardener, who experiences the changes in light, pattern and texture.” Takemitsu’s “Garden Music” exudes a seemingly paradoxical quality of expression, providing an ethereal sense of space and detachment, yet simultaneously exploring the space between objects, “an area full of energy. It is an aesthetic concept that expresses the past, space, and time, but it only becomes meaningful only when filled with motion.”

Toru Takemitsu: In an Autumn Garden (Music Department of the Imperial Household) 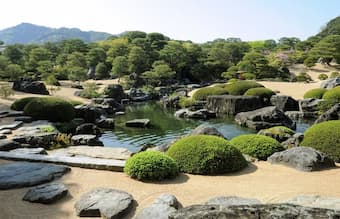 Takemitsu explicitly credits the designs of Japanese gardens as the source of his inspiration. A scholar writes, “there are actually two meanings in this single metaphor: the vertical aspect of his garden music is represented by his multi-focal orchestration, but the more relevant here is its horizontal or temporal aspect that is comparable to the stroll in the garden itself. It is embodied in these three works as the recurrence of primary melodic/harmonic ideas in different guises through the principle of coloristic variation.” In its simplest form, this technique allows the composer to restate ideas with an emphasis on changes in instrumental timbre while “nonetheless encompassing more traditional kind of development as well.”

Acute sensitivity to complex sound and tone qualities invariably informs Takemitsu’s soundscape. Besides the beautiful noise of “sawari” and the silence in “ma,” Takemitsu’s music is buoyant and tinged with delicate tonal colors. In his conception of time as a circular, constantly changing state, Takemitsu “manages to evoke the temporal qualities of life, growth, and shorter natural cycles existing in the Japanese garden.” As he once stated, “I do not stop composing, because I cannot give up hope of being one of these gardeners cultivating infinite time.” And while the parts of the performers evolve organically, the decisive aspect is the role of the listener within his Musical Garden. 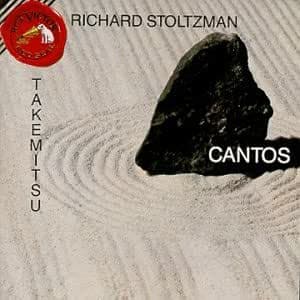 According to Takemitsu, “both composers and performers should allow sounds to develop naturally beyond any personal expressive aims, emphasizing the individual focal points of the listener’s experience.” His desire, according to scholars “was for the listener to play the role of a stroller and/or observer in this metaphysical garden, encouraged to view the rich network of motivic and harmonic interconnections from a detached, contemplative perspective.” In a sense, the listener must provide his own version of the compositional intent or connection of meaning while contemplating the silence defined by the sound, like empty space between rocks of the Japanese garden. In Fantasma/Cantos Takemitsu opens the garden with three breathing chords, and starts the clarinetist on a circular journey using the triton interval, linked to an upper half step that then moves chromatically downward to a perfect fourth. As Richard Stoltzman explains, “immediately the orchestral garden reflects, refracts, and marvelously colors this view as the clarinetist begins to explore transpositions and embellishments. As we follow the clarinetist to that point midway round the garden he experiences a moment which Toru marks calm and ecstatic. Forward motion stops and the clarinet ascends a simple, single scale floating on an exquisitely orchestrated sustained chord in woodwinds and strings. This magic moment divined by Toru is like nothing else I’ve ever experienced…Whenever I arrive at that precious moment in a performance I am lifted up by that quietly ascending scale blissfully aware of the impossible made musically manifest.”