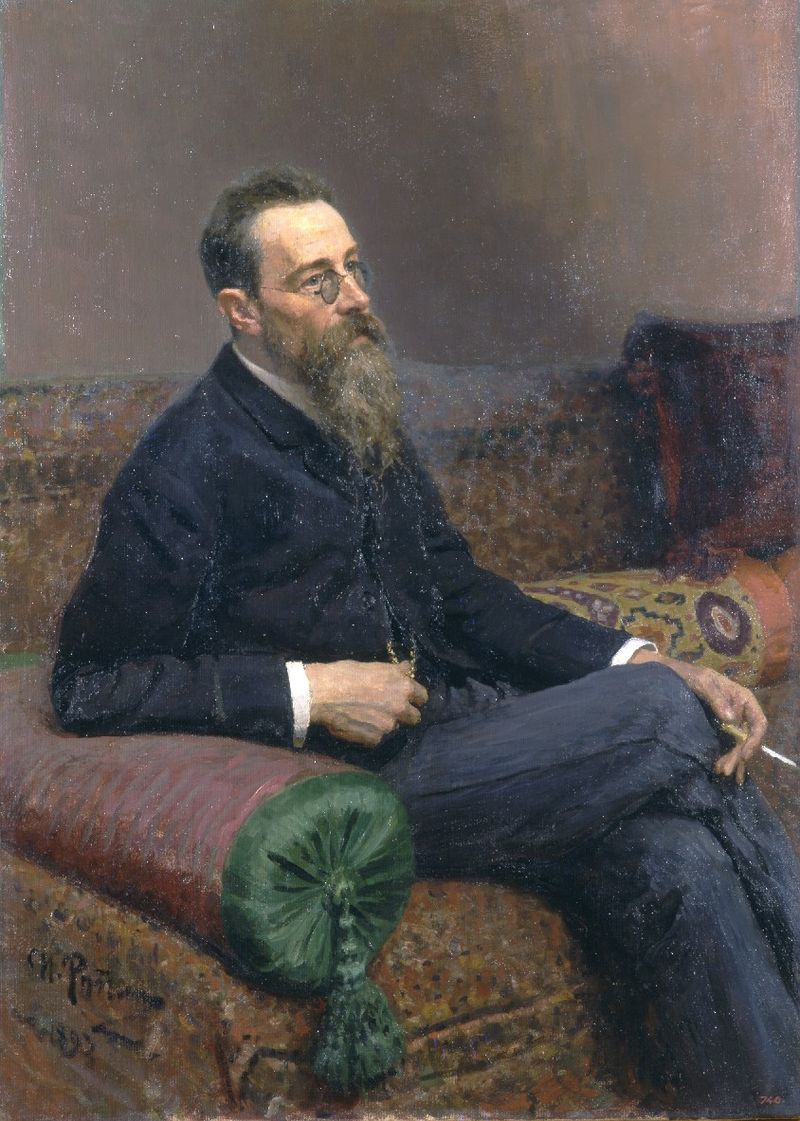 The Russian composer Nikolai Rimsky-Korsakov (1844-1908) was unusual in that he combined his music career with his professional career in the Russian Navy, first as an officer in the Navy and then as inspector of the Naval Bands. His musical skills and ear made him a master of orchestration, which in hands became much more than writing music for an orchestra, but writing music for orchestra that brings out both the best of the music and of the orchestra.

Rimsky-Korsakov, both in his own music and as a part of The Five, strongly believed in developing a nationalistic style of classical music. Elements of Russian society beginning with folk tales and folk songs, combined with uniquely Russian musical elements were important in his work. The use of ‘exotic’ harmonic, melodic, and rhythmic elements of music, which to European ears were considered musical orientalism helped Rimsky-Korsakov forge a national musical identity.

This isn’t to say that Rimsky-Korsakov was unaware of European trends. He studied them as part of his appointment as professor of musical composition, harmony, and orchestration at the St. Petersburg Conservatory. His own techniques of composition and orchestration were broadened by exposure to the works of composers such as Richard Wagner, who brought a more subtle emotion to German music through his works.

He became a friend of the Russian music publisher M.P. Belaieff in Moscow in 1882 and this wealthy patron encouraged Rimsky-Korsakov to expand beyond the weekly quartets held at Belaieff’s house and so the Russian Symphony Concerts series was inaugurated in 1886. These concerts featured Russian compositions and encouraged Rimsky-Korsakov to write some of his best-known works, including Scheherazade, the Capriccio Espagnol, and the Russian Easter Festival Overture. Each of these works focused on a different musical source: Scheherazade on orientialism, Capriccio Espagnol on folk song, and the Russian Easter Festival Overture on Orthodox liturgical themes.

Rimsky-Korsakov regarded the Russian Easter Festival Overture as a kind of homage to both his national music history and to two dead friends, Modest Mussorgsky and Alexander Borodin, both members of The Five.

While the Russian Easter Festival Overture will be most open to those who are familiar with the music of the Russian Orthodox church, the music was intended by Rimsky-Korsakov to capture the wonder of the Easter night ‘…this transition from the gloomy and mysterious evening of Passion Sunday to the unbridled pagan-religious merry-making on the morn of Easter Sunday.’ It is at the end, with the ringing of bells, we come into the Russian meaning of Easter.