As a composer and concert reviewer, I sit in a unique position of being someone who creates music and then has to write about it.

Leonard Bernstein was a composer, conductor and educator like few others. Here Leonard Bernstein discusses Shostakovich’s 9th Symphony. His knowledge of and insight on music is truly astounding. There are millions of books, courses, radio programs, blogs and podcasts discussing what music means. They talk about how music works and what it is saying. 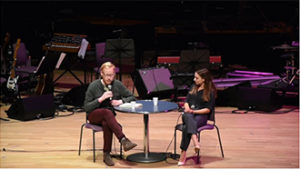 I find some of this discussion useful and entertaining. I’ve written millions of words on the subject of music. I talk about it all the time; I even dream about music. But does all this talk about music actually make the enjoyment of hearing music any different?

I often get people asking me to describe my music. My standard answer is, “it’s sort of like Prokofiev’s”. Usually, I get an “oh, Prokofiev” reply. Meaning that the person does not like Prokofiev or has not listened to much outside of the overplayed Dance of the Knights from his suite, from Romeo and Juliet. There you go. Now I’ve added to this one-sided conversation.

Talking about music is not a waste of time. That said, would I rather hear music than the talk about it? Yes, I would.

As a concert reviewer and a composer, I usually find myself describing the music more at concerts than the performance. But, just how can another description of a piece by Mozart or Beethoven add something unique to the already overblown evaluations surrounding these composers, or other overplayed popular composers? 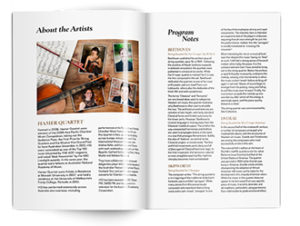 Yet, I persist. I want to say something about the music that others have not picked up on; if that’s possible, which I doubt. Everyone hears music their way. So is there any point in discussing music? There is. Just look at all the music magazines, like this one and others that people rely on to find out about composers and music. These same people will probably buy some of the music by these composers based on what they have read. So there are beneficial things said about music.

The language of music hits us as emotions. While we speak about our emotions regularly, we understand them more when we experience them, just like music.

Maybe all this discussion about music is based on the wrong aspects of the subject. Maybe we should be asking, why does music exist at all? And not, what does this music mean?

Why do we need music? Why do we create music? I’m sure it’s not so we can just talk about it. I’m sure we create music because it is so difficult to describe and explain our emotions, so we use the language of music to tell people how we feel.

You may remember mixtapes. These were a selection of a person’s favourite music collected together on one cassette tape. Some people had one tape for every emotion they wanted others to know about. Such as love, fear, memories, or how they felt about missing someone close.

Today, mixtapes still exist as playlists, and things like lists of our favourite pieces, like mine. Rob’s 10 All-Time Favourite Music Pieces. When you gave a mixtape to a significant other, it was an intimate way to prove your feeling to another; if they liked the music, that is.

The reason I create music is that it is impossible to express some things in any other medium. I have no idea what most symphonies, sonatas or concertos are about. Mostly, I don’t care to know, but I like listening to them. The interesting thing about music is when we hear a piece with a title like a symphony, or concerto, it conveys no emotion in the title, yet the music does.

But then we hear a piece with a descriptive title like Dance for a Dead Princess by Maurice Ravel, we know exactly what that music and the title is telling us.

The reason I listen to music is to be moved. I want to hear other people’s expression of their emotions through music. I, and I’d suggest you, you don’t need to be told what a piece of music is saying, and you don’t need someone to explain it to you. You may be like me and enjoy understanding the inner workings of music and how the composer came about creating it, but outside of that, any further discussion is pretty much useless.

Talking about music has its place. But most of the over-analysed texts and conversations on what music means, is for me, a waste of time. Unfortunately, my bookshelves are filled with such books.

Listen to music, feel it, let it change you; that’s what composers want. That is why they express their emotions through music.