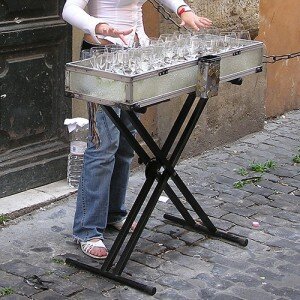 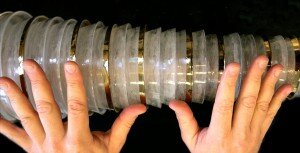 Invented by one of the founding fathers of the United States, Benjamin Franklin, this sweet-sounding instrument was probably designed after a few glasses of wine. At least that’s what happens at most parties after a bucket or two of wine that I go to. People think they are musically inclined and begin to prove their discovery by sticking their fingers in your wine and making circles around the rim of your glass to create a sound. At any rate, that’s what my mate does. 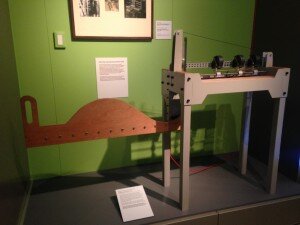 Amazing Australian composer and inventor of musical instruments, Percy Grainger (1882-1961), who reportedly loved blue roses, (look it up) made instruments that look and sounded like nothing else. Grainger’s unique style and sensibility helped shape the music of Australian composers to come. Percy was such a crafty musician and creator; he even has a museum named after him – University of Melbourne’s Grainger Museum.

It’s Percy Grainger again, who else? Percy was so fascinated with creating music and instruments, he along with musician and singer Burnett Cross invented The Free Music Machine. A complicated-looking construction based on and even more complicated musical design. It uses eighth tones and has an independent rhythmical structure. Good luck trying to sell unique independent music today.

The Nyckelharpa looks more like a weapon than anything else. But, its sound is to die for. This one has a multitude of strings, and these things called key-actuated tangents, which change the pitch. From Sweden, it’s a traditional instrument that’s a crossover of a few other instruments. It can be plucked, bowed, pressed and picked. Here’s a video showing its versatility. Thomas Roth (Nyckelharpa) – Ingredients 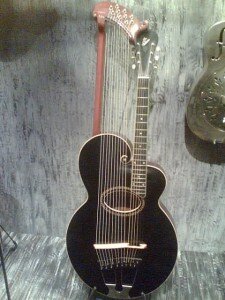 Here is Jamie Dupuis on Harp-Guitar performing The Sound of Silence.

This one you could call a little devil of an instrument because that’s its nickname, the little devil. Invented in either England or France around the early 19th Century. It is probably an offshoot of the Harp-Lute. Invented by a one A.B. Ventura. Like a lot of combination-instruments, the sound of the Harp-Guitar is smooth and dreamy because of the blending of the individual tones. But, its origins could be from West Africa. The Kora is an instrument which looks and sounds a bit like a Harp-Lute.

The West African harp-like instrument the Kora has 21 strings and a beautiful sound. It accompanies the human voice superbly. It has a long history going back before the Baroque period. Its portability has seen it become a national instrument for many people in Africa. You can see from its construction and its sound, where the modern harp came from. Here it is explained how you play it and you can hear its bright sound.

The Subcontrabass Flute looks like an oversized paperclip. But it sure doesn’t sound like one. So, just how low can you go on this massive instrument? It goes down to C1. That’s the first C on a standard piano. Go and hit that note now and imagine it sounding on a flute, scary, hey? It stands about 2.5 meters high and has almost seven meters of tubing. It weighs about 15 kilos, so it can’t be held and played at the same time unless you are a superwoman.

Perhaps the most useful, and the most portable instrument in the world is The Beer Box

Now here’s a handy instrument. Made famous by legendary Aussie folk musician, Ted Egan. People think you need to pay thousands of dollars to buy a unique musical instrument. Not so. And, this one comes with a free case of beer. Of course, the box is about $50.00 nowadays, but the sounds you can produce from this cardboard contraption are limitless, especially after consuming the contents of the beer box.