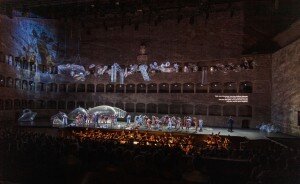 Salzburg generally does Mozart exceptionally well. But this year Salzburg did very little well, including Mozart.

The Salzburg native’s seminal work is difficult to perform at the best of times. The story set in Crete after the Trojan War poses challenging questions of honour, integrity, loyalty and love. American bad boy director Peter Sellars, who has taken charge of several productions in Salzburg since 1992, decided to give his Idomeneo the environment and immigration treatment. 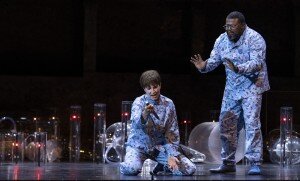 Sellars’ casting appeared principally driven by ethnic decisions. Idomeneo was sung by the black American tenor Russell Thomas, who was neither a great singer nor an inspiring actor. But he had the remarkable ability to hold his arms aloft for much of the evening. As King of Crete, he also looked good in full military regalia. 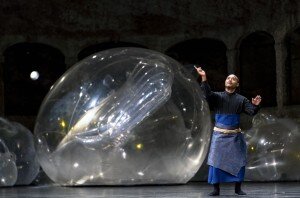 His son Idamante, a trousers role, was sung by Irish mezzo Paula Murrihy, who was a proficient though unremarkable singer looking plainly ridiculous in her pyjamas which he/she kept on even after being declared the new king.

His lover and future bride Ilia, daughter of King Priam of Troy, was sublimely sung by Chinese soprano Ying Fang. Whether ethnic considerations played a part in her casting is unclear, but she was at least permitted to change into more regal clothes for her husband’s coronation, after wearing immigrants’ de rigeur brown pyjamas for the first part of the evening. 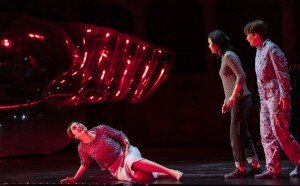 Elettra, Princess of Argos, looked like a standard secretary and was directed to spend a lot of time rolling on the floor. But the American soprano Nicole Chevalier was spectacular, and went a long way to save what could be saved of the evening. Her finale “D’Oreste, d’Ajace ho in seno i tormenti” was one of the few moments that the Festival’s spoiled audience got excited about what they were subjected to. 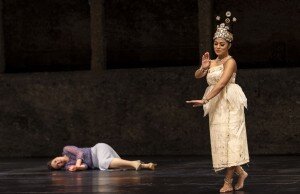 The last act intermezzo was accompanied by a traditional dancer from Kiribati – one of the island groups under threat of obliteration from global warming. Get it? He was joined on stage – one cannot claim joined in performance – by a Hawaiian model and dancer (and former Miss Tonga) who made some economic movements but looked smashing in her regal outfit. It was hard to figure out which declining civilization she was meant to represent. 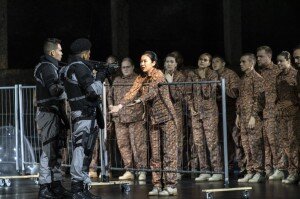 The production escaped complete opprobrium by bringing in the sensational Freiburg Baroque Orchestra, which played Mozart’s music with enthusiasm, unbridled beauty and great energy – even while standing up. They were delightfully led by the charismatic conductor Teodor Currentzis, a specialist of the Fach. Watching him passionately and lovingly lead this orchestra with hand and arm movements that are nothing short of a sensuous ballet, ranging from sweeping grand gestures to delicate curled finger movements, was the most beautiful dance of the evening. He is an utter pleasure to watch and listen to.

He also brought over his favourite chorus from Perm, there must have been a hundred members, who sang precisely and passionately. But they looked absurd in their sleepwear and senselessly charged back and forth across the enormous stage of the Felsenreitschule, the largest stage of the festival complex. This Idomeneo might have worked better in one of the smaller venues. But it would have worked best with a different director. 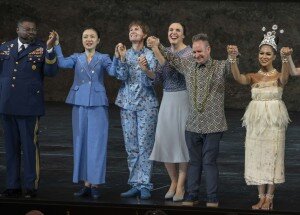 At his stage call Sellars was roundly booed which he seemed to relish, though some supporters also voiced their enthusiasm for his rather sparse ideas on a topic that deserves better treatment.

Productions of such questionable quality contribute as much to the demise of a festival’s reputation, as Global Warming contributes to the very real threat to Pacific island nations.