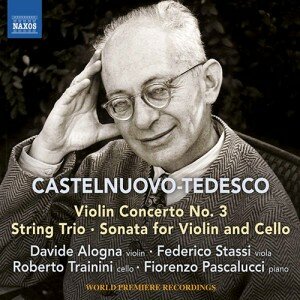 From CASTELNUOVO-TEDESCO, M.: Violin Concerto No. 3 / String Trio / Sonata for Violin and Cello (2018)

The three previously unpublished and unrecorded chamber works in this programme were all written after Castelnuovo-Tedesco’s enforced move to the United States from his native Italy. Evoking the emotional day on which the composer sailed into New York for the first time, the Third Violin Concerto was composed for Jascha Heifetz specifically as a duo for violin and piano. Established as a highly regarded teacher and composer of film music, Castelnuovo-Tedesco rediscovered the joy of chamber-music making as part of the Hollywood musical community.