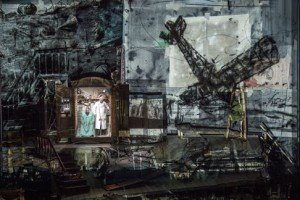 Salzburg doesn’t fear difficult opera. And Alban Berg’s Wozzeck certainly qualifies as one. Infrequently performed on more conventional stages because of the inaccessible music and distressing storyline, Salzburg embraced it wholeheartedly, both musically and visually.

South African artist William Kentridge was not only chosen as director for this new Wozzeck, but was also featured in two museum exhibits in the town. The mountain-top Museum der Moderne displayed the artist’s iconic visual vocabulary, featuring large scale exhibits of his animated images, replete with enormous installations of black and white shadow-based processions and marches. 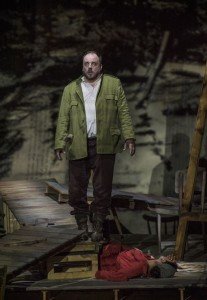 At the Festival’s Haus fuer Mozart, the artist’s haunting imagery set the tone for the nightmarish world that the abused and impoverished soldier Wozzeck inhabits. Cleverly filling the stage (sets by Sabine Theunissen) with a multitude of chairs, ramps and one ominous and highly versatile armoire that housed the doctor’s office, the bedroom and a barracks. Kentridge populated this dark and treacherous universe with ragged, desperate, injured and mutilated people wearing abstracted gas masks and carrying crutches. Wozzeck’s son was a wooden puppet with a gas mask for a face. The set was further agitated by Kentridge’s idiosyncratic black and white moving images, animated charcoal drawings and occasional explosions of disturbing colour. 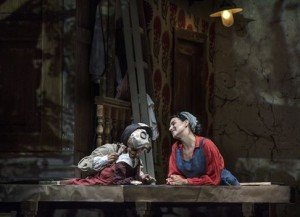 This tormented world provided the backdrop for an extraordinary cast of performers led by German baritone Matthias Goerne. His precise, disciplined artistry, widely admired in German Lieder repertory, adapted well to the tortured and simple minded Wozzeck. Marie, the neglected girlfriend and mother of his child, was portrayed by soprano Asmik Grigorian. The Lithuanian delivered a spectacular Salzburg debut in this challenging role, boasting vocal strength and beauty with an intensely engaging stage presence. This is a singing actress with astounding vocal skills.

Gerhard Siegel was a pushy Captain, John Daszak a boisterous Drum Major and Jens Larsen a freakily scary Doctor. The diction of the principals was crystal clear, noteworthy Mauro Peter as Andres who sang in actor quality German. 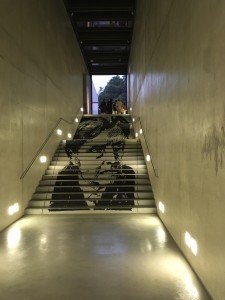 This Wozzeck, a coproduction with the New York Met, the Canadian Opera Company and Opera Australia sets new standards of dramatic intensity and musical quality, and provides a jarring indictment of war, poverty, violence and bullying. This was Salzburg at its finest. A musical, artistic and dramaturgical Gesamtkunstwerk.