Artists Behind the scenes
Behind the Curtain
The BBC Music Prank
by Georg Predota August 13th, 2017 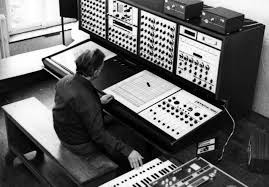 “Piotr Zak, who is of Polish extraction but lives in Germany, was born in 1939. His earliest works are conservative, but he has recently come under the influence of Stockhausen and John Cage. This work for tape and percussion was written between May and September of last year. Within the precise and complex framework defined by the score, there is considerable room for improvisation.” This is how the BBC Third Programme network introduced the composition “Mobile for Tape and Percussion by the exciting new, imaginative, young Polish composer Piotr Zak” on 5 June 1961. This national radio service produced and broadcast by the BBC between 1946 and 1970 introduced listeners to a wide range of serious classical music and live concerts, as well as contemporary composers and jazz.

The network was controversial from the beginning, because of perceived elitism and the cost of production for a relatively small number of listeners. The 12-minute documentary on Piotr Zak ran twice, and was reviewed by three critics. Jeremy Noble wrote, “It was certainly difficult to grasp more than the music’s broad outlines… and it seems a lapse on part of the BBC as such recognizably musical events as did occur seemed trivial.” Donald Mitchell called the performance “wholly unrewarding,” and added “Zak exploited the percussion with only limited enterprise and his tape emitted a succession of whistles, rattles and punctured sighs that proclaimed, all too shamelessly, their non-musical origins.” Rolly Myers devastatingly remarked, “the BBC’s broadcast of such a thing is a serious error of judgment… as it seemed to me to be a series of the more unpleasant kinds of kitchen noises, accompanied by bangs and thumps, hisses, shrieks and whistles.”

Actually, Myers was right on the money because two months later, the BBC confessed that Piotr Zak didn’t exist. The network explained, “We dragged together all the instruments we could and went around the studio banging them… It was an experiment to demonstrate that some contemporary compositions are so obscure as to be indistinguishable from tapes of percussion played at random.” The music critics agreed that the manner of presentation required them to take the piece seriously, but that they had not fallen for the BBC hoax. And now you know why we desperately need proper music critics! And since Zak turned out to be pure fiction, why don’t we listen to the Mozart B-flat Serenade, an actual composition that featured on the very same program!