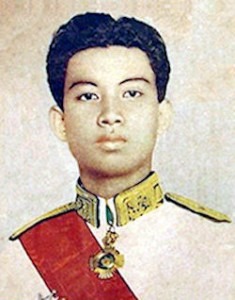 Recently, I introduced you to the swinging king of Thailand! King Bhumibol the Great, who died in October of 2016, was an accomplished jazz saxophonist. He founded his own band, paired up with jazz great Benny Goodman, and over a period of five decades composed a total of 78 songs. But Bhumibol was not the only talented Southeast Asian Royal with music in his blood! Please meet King Norodom Sihanouk, who ruled Cambodia from 1941 to 1955, and then again from 1993 to 2004. A charismatic leader, whose remarkable skills of political adaptation personified the troubles of his tiny kingdom, was affectionately known as “father prince.” He rose to the throne after the Second World War, and successfully campaigned for Cambodia’s independence from French rule in 1953. He abdicated in 1955 and became Head of State in Cambodia, but with the formation of the US-backed Khmer Republic, he fled to China and North Korea and founded a government in exile. Various bloodsheds and wars later, Sihanouk was reinstated as Cambodia’s Head of State in 1993, and once again appointed king shortly thereafter. 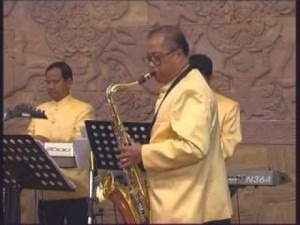 Even during the darkest hours of one of Asia’s oldest royal houses, the king never lost his flair for flamboyance or his taste for the finer things in life. As a young ruler he gained a well-deserved reputation as a playboy, keeping a stable of concubines who eventually bore him at least 13 children. Having received a first-rate French education, Norodom also developed a reputation as a gourmand and an amateur filmmaker. Even in his years in exile with his wife, Queen Monique, he lavishly entertained diplomats and foreign officials with Champagne breakfasts, elaborate French meals and regaled guests at his exclusive parties on the saxophone. Described as “that happy, sexy, sax-playing prince,” Sihanouk wrote at least 48 musical compositions between the late 1940s and the early 1970s. Combining traditional Khmer and Western themes, a large majority of his compositions are sentimental ballads and romantic love songs. And as expected, a number of them are dedicated to his wife Monique! 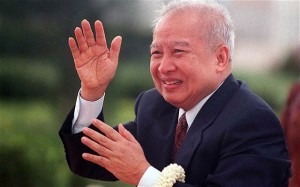 During his youth, Sihanouk took lessons on the clarinet, saxophone, piano, and the accordion. He soon founded a musical band and entertained guests to the palace with French songs and his own compositions. Accompanied by the royal military orchestra and a variety of Cambodian pop singers, he even went on tour across various Cambodian provinces. Attempting to showcase the beauty of provincial towns and foster a sense of patriotism and national unity, he penned such notable compositions, as “Flower of Battambang,” “Phnom Kulen,” and “Phnom Penh.” After his ouster in 1970, Sihanouk wrote a number of revolutionary songs praising the leaders of Communist countries, including the Korean “Hommage Khmer au Maréchal Kim Il Sung.” Sihanouk remained active as a performer, singing in concerts held at the royal palace on a number of occasions.

He was a king, head of state and a capable musician and composer, but the only thing he really ever wanted to do in his life was to direct, product, write the script, compose the music, and star as the leading man in his own movies! And so he did! Throughout his lifetime, he produced roughly 50 films attempting to portray Cambodia in a positive light to the world. His 1967 film “The Enchanted Forest” was nominated at the Moscow International Film Festival, and a year later he launched the Phnom Penh International Film Festival. Although his films apparently are of “amateur standard” and supposedly “lack artistic qualities,” the royal dedication to the cinematographic art is truly commendable. And since he donated his film archives to Monash University in Melbourne, Australia, you can go there and take a look for yourself!