Blog
What to Do When Screw-Ups Happen
by Janet Horvath December 7th, 2019

After many decades of performing, one would think everything that could possibly go wrong has… Wrong! Or am I a magnet for snafus?

Last month, my pianist and I drove the two hours to a University in a nearby town. They have a beautiful music building with a lovely recital hall. We’d performed there before, and my piano partner was looking forward to playing their Steinway grand piano.

A lecture/demonstration/performance I do with PowerPoint, it’s interspersed with several lovely cello-piano interludes, including Habanera by Ravel, The Prayer by Bloch, and some Bach. After a dozen emails back and forth with the presenters, I’d explained all my needs. They assured me their tech person would be on-hand to facilitate the set-up, have all the appropriate cords, extension cords if necessary, the PowerPoint projector, the screen, a microphone, and a musician chair ready. 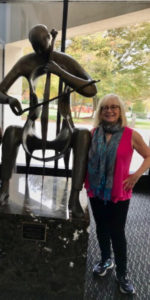 On the day of the gig, I loaded the car with my music, two music stands, the cello, my computer, my remarks, a bag of some display items, and of course, goodies to eat on the way—finger food— easy to consume while driving but nothing too sticky that my hands would gum up the steering wheel or heaven forbid, the cello fingerboard.

Despite road construction, we arrived at 5:30pm for the 6:30pm performance—plenty of time to set up, warm up, and change clothes. We dragged our stuff into the building to find the recital hall doors locked. No-one was around. Not a good sign. After several minutes passed, a caretaker unlocked the doors. It was pitch dark. I groped my way into the foyer and felt the walls for a light switch. I found a switch plate. And the house lights came on. 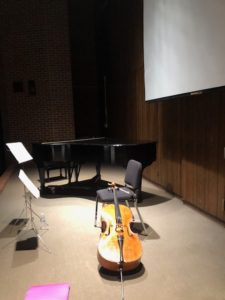 The piano shoved to the side of the stage, was covered in a huge black quilt. Heather and I pushed the piano center stage. While I set up the stands and chair, Heather searched for stage lights. When the professor in charge of the class arrived, he located the lights and a button behind a sapphire blue curtain, which when pressed, lowered a screen.

We still needed the tech person to turn on the projector from the light booth way up over the main floor seating. Several more minutes ticked by.

Heather had a surprise when she removed the quilt from the piano. There was an enormous clamp across the lid of the keyboard, and who had the key?

Racing out of the theater, the professor tried to locate someone, anyone, to help. There wasn’t even a custodian around. I made several calls, sent texts and emails to the contacts and got nothing but voicemail messages.

The audience began filing in. 6:15 pm. “Better change in the back room,” I thought,” move my fingers a little.” When at 6:25 there was still no sign of anyone with the keys to the piano or the projection room, I said, “Well I guess I could just talk and not play…”

The professor was aghast, “You won’t play the cello? But you must play for the students!”
I thought for a moment. “I suppose I could play a little Bach…”
“Oh, but you have to do your entire presentation. Please!”

Hoping the audience would be able to see the photos of the PowerPoint, I turned my computer screen toward them, and presented the entire two-hour presentation, without any piano accompaniment, Heather sitting forlornly in the hall. I admit, it was tricky. All the timings so carefully planned, had to be adjusted on the spot. I hoped my message was coming across. Afterwards, one of the young male students blinked back tears as he thanked me. 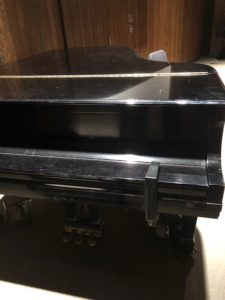 Last week, the screw-ups in another performance were entirely my fault. Once again, it was the multi-media presentation with PowerPoint, recitation, and cello interludes. That day my husband and I received a last-minute request to tour our home, which is for sale. “No problem,” I thought, “I’ve done this presentation numerous times. Sure, I can practice, then clean the entire house—vacuum, sweep, scrub the sinks, get the dog out, get the cello out—and be away the hour or so in the afternoon for the house tour.”

But I was exhausted when we got home at 3:45pm, with time only to eat a little something, change my clothes, warmup, and pack up all the paraphernalia.

Our car was in the shop, so I took a cab. The driver watched as I loaded my bag, my purse, the cello. Then he said, “Are you a Singer?” I guess he thought I was dragging a guitar around. A large guitar…

The hall wouldn’t be available until 7:00pm, for the 7:30 performance. At the appointed time, several people were ready with the projector, extra cords, tables, chairs, and two (unlocked) pianos to choose from… I took my MacBook Pro out of the case, then my heart stopped. I’d left the adaptor at home! As the crew tried one plug after another, my blood pressure rose. “I’m so sorry. You know, I’d rather play for 10,000 people than deal with technology.” The presenters thought we could transfer the program onto a disc or Google drive but I knew the production, with over one-hundred hi-res photos, could take hours to transfer. My son was across town but readied to send the right adapter in an Uber. Five minutes before the program was to begin one of the young crew members ran to the library and returned with a box full of adapters. One fit! 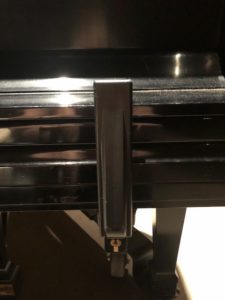 I scrambled to get the presentation plugged in and up onto the screen, then raced backstage, grabbed the cello, my music, and we entered the stage again, this time seemingly composed, and we began to play. Within a few notes, I realized not only had we not even tuned—the piano was flat—but I’d forgotten my puck backstage, which keeps the cello endpin from slipping. And I call myself a seasoned professional!

My years of training kicked in. I concentrated on my playing, breathed deeply to lower my heartrate, and compelled myself to concentrate despite my fatigue.

Once we were performing things were under control.

I learned valuable lessons from these concerts. Even pros have their limits. No matter how many times and how many years we perform, we do need to take time to focus, to stick to our pre-performance routine, to rest, and not underestimate the efforts of performing. And when things go awry, we should be prepared and able to adapt to whatever circumstances present themselves, and do our best to convey the music.