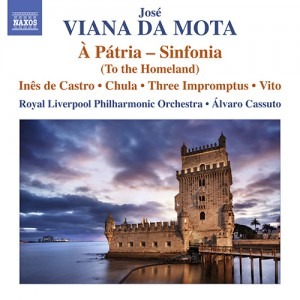 Symphony “A Patria” (to the Homeland) Op.13
II Adagio Molto

The most distinguished pianist of his generation, a brilliant pedagogue and a highly gifted composer, José Viana da Mota was a towering personality in the field of Portuguese music. Disapproving of ‘modernistic’ compositional trends he stopped composing around 1910 but not before he had written his Symphony ‘To the Homeland’, a brilliantly orchestrated paean to Portuguese prowess and discovery which makes use of Portuguese folk dances and songs. Based on the dramatic life and murder of the 14th-century noblewoman Inês de Castro, Viana da Mota’s Lisztian symphonic poem is an early work notable for its kaleidoscopic sections full of inspiring contrasts. This recording presents the complete orchestral works of Viana da Mota.