Artists Behind the scenes
Big Luciano and his Little Friend
by Georg Predota April 20th, 2017 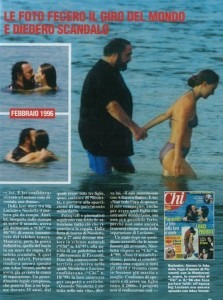 Luciano Pavarotti was well into middle age, enormous in circumference, and rich beyond comprehension. He certainly was famous the world over, and it came as no surprise that his passion for women—only rivaled by his love of food and money—would eventually get him into trouble. Throughout his life, it had become his habit to make sexual advances at everything wearing a skirt! When he arrived at music venues he would immediately disappear into his dressing room with his secretary or a female member of the supporting cast, and only emerge for his performance. A music critic compared him with “a satisfied sultan, with a harem of adoring women.” And Big Luciano wasn’t shy talking about sex, even praising the virtues of Viagra to a reporter. “Sex is always good for you if your little friend asks for it. It doesn’t matter if it is before or after the show. The best thing would be during the show, on the only table on the stage.” I am sure most of us are deliriously happy that he never realized that particular dream! Nevertheless, Pavarotti certainly played out his affairs in public, providing plenty of fodder for gossip columnists and paparazzi photographers. The one person who seemed to have taken his various indiscretions in strides was Adua Veroni, his wife of 35 years! Both grew up in Modena, went to school together and married in 1961, after being engaged for seven years. They had three daughters, and Adua graciously declared, “Pavarotti had many adventures. But then again, he was a man who travelled alone a lot and fans threw themselves at his feet.” However, her patience was not limitless! In 1996 Luciano was photographed with the young and slim student Nicoletta Mantovani—his personal secretary at the time—cuddling on a beach in Barbados. He proudly declared, “She is the favorite in my harem,” and Adua told Big Luciano to take a hike! Luciano and Adua eventually divorced, and Mantovani, besides overseeing his career, gave birth to their daughter. They married in 2004, but the relationship soon deteriorated. On the verge of breaking up, Luciano was diagnosed with pancreatic cancer. Apparently, he reconciled with his three elder daughters, and Adua paid him a visit on his deathbed. When he died in 2007, the media speculated on a potentially acrimonious battle over his assets, but an amicable agreement was reached. Big Luciano and his little friend are finally at ease!