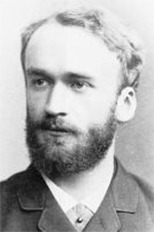 He was frequently compared to Paganini, and in central European cello circles, Julius Klengel (1859-1933) was even called an institution. A natural-born cellist, he stopped having formal instructions at the age of 14! At fifteen Klengel performed for the first time in the Gewandhaus Orchestra, and he celebrated his first triumph as a composer and cellist on 16 December 1880 with the premiere of his own first cello concerto. A critic reporting for the Neue Zeitschrift für Musik wrote, “Mr. Klengel possesses a virtuosity, an astonishing virtuosity, a staccato without equals, a routine in double stops and in the most difficult passages such as we have heard and admired only among the most important virtuosos.” Only one year later he became principle cellist at the Gewandhaus Orchestra and served as the cellist of the Gewandhaus Quartet. He toured extensively throughout Germany and Europe and eventually accepted an appointment at the Leipzig Conservatory. Young cellists from all corners of the world flocked to Leipzig in order to receive his instruction.

Gregor Piatigorsky commented on Klengel’s unique method of instruction, “Since we were completely oblivious to the technical difficulties of playing the instrument, he wanted one student to learn from another. His method was simple, he would remark, for example ‘Schneider’s vibrato is wonderful.’ So everybody came to spy on Schneider’s vibrato. And to Schneider he said, ‘Auber’s trill is the best.’ Although the pupils were jealous of each other, one learned from the other and made progress.” Klengel seemed to have had a thoroughly pleasant personality, and visitors and students described him as free from stardom’s airs, humorous, hospitable, and always ready to help. This is high praise indeed considering that Johannes Brahms, Joseph Joachim, Anton Rubinstein, and Max Reger enjoyed frequent visits to his home. As a composer he ultimately composed several hundred pieces for the cello. Among them are four cello concertos, two double cello concertos, cello quartets, a cello sonata, as well as numerous caprices, etudes and other didactic studies. The concerto for 2 cellos Op. 45—unique because the dialogue between the two soloists takes the place of the dialogue between the solo cello and the orchestra—premiered under Artur Nikisch on 19 December 1912. Klengel and his 21-year old daughter Eva performed the solo parts.