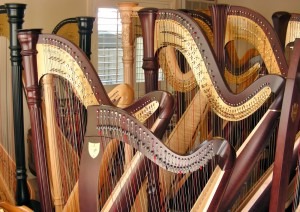 Before she ingloriously lost her head, Marie-Antoinette reigned over music in France in the Age of Enlightenment for nearly twenty years. She invited and actively supported foreign composers, and simultaneously fostered the great tragédie lyrique of Gluck alongside the opéa comique of Grétry and Monsigny. On a more personal level and in a private setting, Marie-Antoinette had a daily routine of playing on the harp or the harpsichord, with a good number of pieces written and dedicated to her.

The harp was an extremely modern instrument and prominently featured in various salons around town. In many ways, it was poised to replace the harpsichord as the most popular instrument for domestic use. Soon, the instrument also appeared in the opera house, accompanying the newest ballets or being used on stage as an element of décor. And a tearful heroine pretending to strum the harp while lamenting the perils of love became a distinctive operative trope. The harp continued its march of triumph by taking the Concert Spirituel by storm. This first public concert series—which began in Paris in 1725 and ran until 1790—was a much lauded meeting place of international virtuosos. Among them was Francesco Petrini (1744-1819), member of a famous Berlin dynasty of harpists employed at the court of Frederick the Great. Francesco initially served as a chamber musician at the court of Mecklenburg-Schwerin, but moved to Paris in 1769. Earning his living as a teacher and performer, Petrini made his debut at the Concert Spirituel. He played a significant part in enriching the classical harp repertoire by publishing four concertos, four volumes of sonatas for violin and harp, duets, romances, and various sets of variations. Petrini even published a treatise on playing the harp, alongside other treatises on harmony.