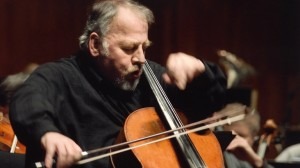 When the cellist and conductor Heinrich Schiff suffered a devastating stroke in 2008, he was in serious danger of loosing all mobility on his left side. As soon as he got to the hospital he almost instinctively started to go through the fingerings of the Prelude of Bach’s first cello suite, moving his fingers ceaselessly to the imaginary music. He kept up the routine for about 20 hours a day, and eventually his entire body—re-energized by Bach fingerings—came back to life. His colleague Steven Isserlis wrote in 2015, “Today, you would never guess that he could have been half-paralyzed, possibly even incapable of speech, or worse. The miracle of Bach, and of Heinrich.” Heinrich Schiff’s engagement with Bach dates back to his famous Suites recordings from the early 1980s. It still is one of the most beautiful and successful attempts to combine modern cello technique with knowledge from performance practice. As a reviewer suggested, “The intimacy and immediacy is intense, but Schiff’s demeanor was one of great humility, concerned only to suggest that Bach’s is the music of the spheres. Splendidly paced, Bach’s linear flow is effortlessly phrased and moves forward with fine spontaneity.”

For his former student Natalie Clein, “Heinrich Schiff strikes the balance between individuality and faithfulness to a composition perfectly, maintaining a deep integrity and old-school seriousness. There is a high-voltage electricity in his vibrato, a breathlessness that keeps you endlessly listening; but his playing also has a sensitivity and a generosity of spirit that makes his sound instantly recognizable.” Schiff took his musical bearing from modern Urtext editions, trying to come as close as possible to the musical intentions of the composer. “Music of the Classical period is very much mistreated,” he once said. “Take the Mozart violin concertos. If you hear any of the top ten violinists playing them it’s beautiful sound, fine technique, but the style is hopelessly wrong – it’s almost a different language.” A substantial number of his recordings have become cornerstones of the cello repertoire, including works by Shostakovich, Brahms, Lutoslawski, Vieuxtemps, Gulda and Cerha. After health problems ended his solo career, Schiff turned his crystal intelligence and unique sense of humor towards conducting, and he appeared with a number of orchestras. Heinrich Schiff died—much too early—at the age of 65 on 23 December 2016.