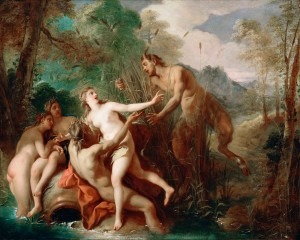 Claude Debussy composed very little music for the theatre. Although he conceived a substantial number of theatrical projects with the playwright, novelist, poet and translator Gabriel Mourey, they somehow never fully materialized. The notable exception is the three-act dramatic poem Psyché. In 1913, Debussy was asked to compose incidental music for the play, which recounts the myth of Psyché as told by the Latin author Apuleius in his Metamorphoses. Inserting the story of the death of Pan according to Plutarch’s version, Mourey supposedly requested “the last melody Pan plays before his death” to be performed from the wings of the stage. And the composer responded with an exceptional work for unaccompanied flute entitled La Flûte de Pan, known today as Syrinx. However, it is highly unlikely that Debussy’s music was played on the occasion of Pan’s death, but that it properly belongs in the first scene of the third act, a moment of intense lyricism in which the atmosphere is full of sensuousness and eroticism. Untangling this initial misattribution turns out to be a fascinating piece of musicological detective work!

During the early stages of composition Debussy writes, “So far, I have not found what is needed because a flute singing on the horizon must at once contain its emotion! That is, there is not time for repetitions, and exaggerated artificialness will coarsen the expression since the line or melodic pattern cannot rely on any interruption of color.” The program for the premiere lists three dates, 1, 3, and 4 December 1913, with flutist Louis Fleury named as the soloist. In addition, the program also indicated, without specifics, the inclusion in Act III of a composition for flute titled La Flûte de Pan by Claude Debussy. Fleury had a reputation as a performer and promoter of contemporary music, and he seemingly possessed the only score of the Debussy work. Following Fleury’s death, the publisher Jean Jobert issued the work in an edition by the eminent flutist Marcel Moyse, who apparently relied on the original source manuscript. However, that manuscript is no longer available! In order to avoid confusion with another Debussy piece Chansons de Bilitis, which contains a movement titled “La Flûte de Pan,” the publisher decided to change the title to Syrinx.

Until recently, the lost source manuscript used by the Jobert edition has been the only original source for Debussy’s incidental music for Mourey’s Psyché. However, a manuscript has turned up in Brussels in the private collection of Madame Hollanders de Ouderaen. This manuscript copy, which is signed and dated November 1913, is inscribed with cues from Mourey’s poem, and may very reasonably be the score from which Louis Fleury played during the December 1913 performance. It is not a Debussy autograph score, but a copy that was used in staging the drama. And the inclusion of excerpts from the Mourey text clearly indicates the exact point where the composition should be performed within the body of the scene. The Brussels manuscript specifies “Act III, scène première” of Psyché as the location of the music within the play. These specifications challenge a long-held assumption that the piece occurred at the point of Pan’s death in the final scene of Act III. Scholars have suggested, “the lengthy passages uttered by Pan just prior to his death do not provide a logical pause for the character to play the flute.” Even more important is the fact that the “sensuous quality of the piece would make a death scene seem inappropriate.” The Brussels manuscript further suggests that in the play, La Flûte de Pan appears within a melodramatic setting, with two actors simultaneously reciting the poem! The differences and similarities between the Jobert edition and the Brussels manuscript—including breath marks and agogic suggestions—have been detailed in a new Wiener Urtext Edition. As such, modern performances can properly reflect on the symbolist confluence between poem and music as melodrama in La Flûte de Pan, or as Syrinx in the context of a work for solo flute.