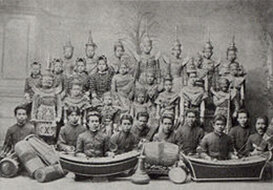 The divide between cultures is as wide as it has ever been today. However, there is a bridge that links us all. Our spoken languages and lifestyles have and always will be different, and vive la différence I say. These things make our societies unique. But, we do need something that binds us as one, and we all have that thing, it’s our classical musics.

I found classical Thai music spoke a similar language to the western classical music I have always loved. The instruments used and musical styles were different, but the sounds connected to me and what it left me with was joy and satisfaction. Just like the music of Ravel and Bach makes me know I am part of something bigger; Thai classical music connected me to the Thai people and their culture.

Indian, Aboriginal, South and North American, African and European traditional music all speak the same language, and that’s the music of the folk. It’s about people and their lives, their traditions and their cultures can be found in the traditional types of classical music of the world.

Classical music as a bridge between cultures could be the path that leads us to better understand each other. The growth of classical music in China has opened up a world of cross fertilisation between cultures. Not only are Chinese and international orchestras visiting each other, but the flow on from the swapping of music between nations is also helping many to understand what other cultures are about. 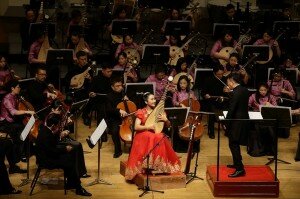 When pipa is combined with the orchestra
© www.nac.gov.sg

Music schools, music competitions, players and composers from western countries and China are all learning about the music and lifestyles of each other. This is helping to break down the barriers and walls that have separated us on so many levels.

This cross-enrichment between cultures is increasing the quality of the players and the music performed. It’s helping all players become world-class performers. Graduate students from Chinese conservatoriums are gaining seats in international orchestras.

What is following on from this development is traditional and contemporary Chinese music is becoming better known in the west. Popular Chinese orchestral music is now available in every country. And there is a world of music and instruments to discover, like the Pipa.

A plucked string instrument, similar to the guitar, the Pipa is a technical and sound marvel. It allows a player to create unique music through techniques that can’t be performed on other guitar-like instruments. For an instrument of only four strings, the sound possibilities seem endless. When combined with the orchestra it adds a new dimension to the beauty and the sound of concert music.

Bringing more new instruments and sounds into the concert hall will not only help cultures to understand each other, but it will open up a world of wonderous new sounds. Composers from across the globe now have the opportunity to write for any instrument they choose. Younger people are more interested in new sounds outside the traditional orchestral range.

There are more children in China who play the piano than there is in the country of Australia.
Learning music opens up a domain of cultural possibilities. The number of Chinese music student that attend the university I go to in Canberra seem to outweigh the other Australian and international music students. They are not just studying music; they are learning about each other’s cultures. The exposure the students get to each other’s way of life will carry with them for all their lives. This helps ensure a greater understanding of not just cultures but will also invigorate younger generations as parents pass their learning onto their children.

The classical music of your region has a vast and interesting history as it does in all countries. The more music we are exposed to will make a difference in how we react to people from across the world. And the calming effect and beauty of classical music once experienced and understood will help bring us all together, no matter where that music comes from.