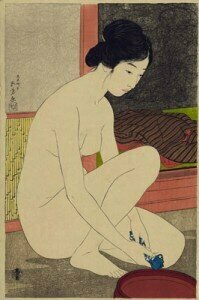 Katsushika Hokusai once wrote, “When I was 50 I had published a universe of designs, but all I have done before the age of 70 is not worth bothering with. At 75, I’ll have learned something of the pattern of nature, of animals, of plants, of trees, birds, fish and insects. When I am 80, you will see real progress. At 90, I shall have cut my way deeply into the mystery of life itself. At 100 I shall be a marvelous artist. At 110, everything I create—a dot, a line—will jump to life as never before.” Hokusai did not quite reach his 90th birthday, but his influence was felt around the world. His Ukiyo-e prints frequently appeared on Japanese screens or scrolls, lending them a sense of narrative. Although published in a great variety of styles and subjects, these pictures were informed by a common look and feel that utilized aerial perspectives, “precise details, clear outlines, and flat color.” Japanese art, and particularly ukiyo-e prints, came to greatly influence Western art, including music. 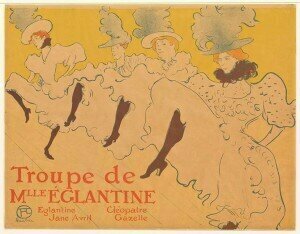 Dedicated to Alfred Cortot, Henri Gil-Marchex (1894-1970) composed his two images of Japan in 1936. And he performed them in Tokyo in May 1937. However, Japanese critics condemned these compositions, considering them “a disgrace to the nation.” Maybe these critics were looking for an ethnographic record, while the composer had no intention to imitate Japanese music, but to describe his impressions of it. Simultaneously capturing the character of Japanese music while embracing the sound world of Debussy, critics were particularly harsh on his “Retour du Yoshiwara,” musically depicting the pleasure district of Tokyo since the Edo era. 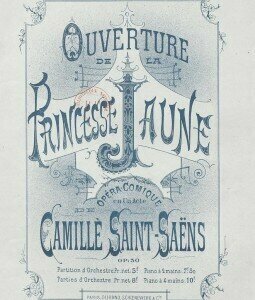 The subject of worldly pleasures had long been a popular subgenre in ukiyo-e art, and it included images of courtesans, teahouse mistresses and the famous “Fujiyama Geisha.” It certainly fueled the interest of Henri de Toulouse-Lautrec, whose lithographs not only imitated the flat colors and outlines of ukiyo-e art, but also its subject matter of performers and prostitutes. He even signed a good many of his works with his initials in a circle, imitating the seal of Japanese prints.

The esthetic and artistic interest in everything Japan was all the rage in mid-19th century Europe. After Saint-Saëns first two produced operas turned out to be rather dismal failures, the director of the Opéra-Comique, Camille du Locle, took pity on the composer and offered to stage an “innocent little work.” Du Locle suggested a collaboration with the young poet Louis Gallet on something straightforward in just one act. As such, according to Saint-Saëns, they “set sail for Japan and La Princesse jaune (The Japanese Princess) was born. It became the cautionary tale about a drug-induced hallucination of a young Dutchman, Kornélis. Bored with his life and with his cousin Léna, the girl who loves him, he fantasizes about Japan and writes passionate poetry to the portrait of a beautiful Japanese girl, the Japanese Princess. Believing that he has been transported to Japan, he declares his love to Léna, who is suitably confused. When he awakes and compares the dream of the Japanese Princess with the reality of Léna, he realizes that he loves only Léna. Sufficed to say, critics were not convinced and it ran for only five performances. 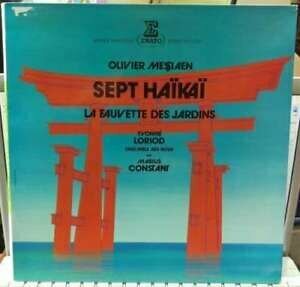 Ever since the 1870s, ukiyo-e became closely associated with miniaturism, “the craft of expressing profundity or intensity of feeling within a limited space or time.” It has often been suggested that Maurice Ravel’s musical miniaturism was a response to the complex style changes inspired by ukiyo-e graphics. Ravels musical textures certainly “suggest a familiarity with ukiyo-e print and the sketchbooks of Katsushika Hokusai. Scholars have argued, “Ravel’s deft evocations of the classic and the exotic intertwines Japonisme and French classicism. And Olivier Messiaen developed a profound love for Japan during his honeymoon. As he wrote to Claude Samuel, “I have all sorts of reasons for loving that marvelous country. Above all, it’s a country where everything is noble… Also admirable are the Japanese musical traditions, and the “Noh” drama and “Gagaku” immediately carried me away. I consider “Noh” the most powerful theatrical expression in existence, and “Gagaku,” which must date from the eighth century, remains incredibly modern.