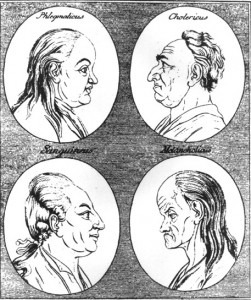 One of the fundamental beliefs of Greek medicine, and one that extended up to the 19th century and the beginnings of modern medicine, was that of the four humours that regulated the body. The four humours were the four liquids found in the human body: yellow bile, phlegm, black bile, and blood. The four humours created the four temperaments of mankind: choleric, phlegmatic, melancholic, and sanguine. When the humours get out of proportion, the body changes character. If there is too much yellow bile then one is too choleric, too egocentric and extroverted; on the other hand, the positive attributes make them efficient workers, ambitious, and leaders. The Phlematic character is inward and private but also steadfast and consistent, making steady and faithful friends. Too much black bile makes one too melancholic. Melancholics are susceptible to depression and moodiness and preoccupied with the problems of the world. Their positive aspects as that these people are self-reliant, serious, and cautious. The Sanguine character is flighty and changeable, chronically late and always forgetful; on the other hand, they are lively, talkative, and pleasure-seeking, making friends easily. I’m sure we all know someone who fits each of these temperaments!

The Danish composer Carl Nielsen (1865-1931) took up the idea of the bodily humours in his second symphony, begun in 1901 and finished in November 1902. Each of the movements takes up one of the temperaments:

Nielsen had been inspired by a comic picture he saw of the Four Temperaments, and he noted that the illustrations were of the most excessive kind: “The Choleric was on horseback. He had a long sword in his hand, which he was wielding fiercely in thin air; his eyes were bulging out of his head, his hair streamed wildly around his face, which was so distorted by rage and diabolical hate that I could not help bursting out laughing.” 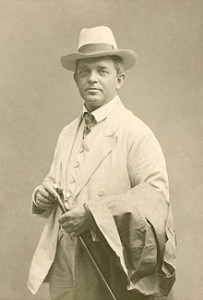 Nielsen’s Choleric movement is all impetuous action, striking out seemingly at random at the world.

His real inclination was to lie where the birds sing, where the fish glide noiselessly through the water, where the sun warms and the wind strokes mildly round one’s curls. He was fair; his expression was rather happy, but not self-complacent, rather with a hint of quiet melancholy, so that one felt impelled to be good to him… I have never seen him dance; he wasn’t active enough for that, though he might easily have got the idea to swing himself in a gentle slow waltz rhythm, so I have used that for the movement, Allegro comodo e flemmatico, and tried to stick to one mood, as far away as possible from energy, emotionalism, and such things.

Nielsen: Symphony No. 2, Op. 16, ‘The Four Temperaments’: II. Allegro comodo e flemmatico (BBC Philharmonic Orchestra; John Storgårds, cond.)
The man of deep melancholy appears in the third movement, which starts with a cry of deep sadness and ends in deep serenity. You can almost see the character’s shrugs and hear his heartfelt sighs, particularly in the oboe line, as he plods along.

I have tried to sketch a man who storms thoughtlessly forward in the belief that the whole world belongs to him, that fried pigeons will fly into his mouth without work or bother. There is, though, a moment in which something scares him, and he gasps all at once for breath in rough syncopations: but this is soon forgotten, and even if the music turns to minor, his cheery, rather superficial nature still asserts itself.

Nielsen: Symphony No. 2, Op. 16, ‘The Four Temperaments’: IV. A Allegro sanguineo — Marziale (BBC Philharmonic Orchestra; John Storgårds, cond.)
After a positive premiere in Denmark and a lukewarm reception on a new music concert in Berlin in 1903, the work has gradually become one of Nielsen’s best loved works. Everyone can find a little bit of familiarity in the characters portrayed in each of the movements.