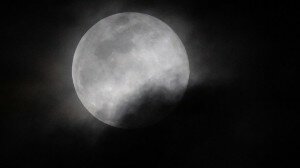 The moon is always there, hanging over the sleepy earth or visible in a blue sky, just to remind us of its presence, even during the day. The 21st century fashion for looking at the Supermoon or whatever this month’s variety of moon just reminds us again of its closeness.

It’s been a part of music for centuries. The Renaissance English composer Robert Johnson set a song in Ben Jonson’s masque for Prince Henry, Oberon the Fairy Prince, where the Silenus addresses the moon as he and his fellow satyrs ‘fall into an antic dance full of gesture and swift motion.’ 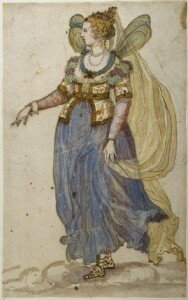 Ingio Jones: Sketch for the masque ‘Oberon the Fairy Prince’, held in 1611 at Whitehall Palace

A love song by Giovanni Pierluigi da Palestrina, ‘Deh, or foss’io col vago della luna,’ on a text by Francesco Petrarch, sings of his lover who he wishes would come to him with the moon and stay until the sun.

Palestrina: Deh, or foss’io col vago della luna (Concerto Italiano; Rinaldo Alessandrini, cond.)
In a light mode, Johannes Brahms sets a text by Franz Kugler, has the setting of the moon hanging over a mountain, while in the garden, serenaded by 3 students, the ‘loveliest of women’ whispers ‘Forget me not!.’ to her lover. 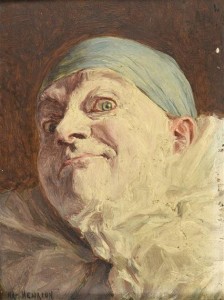 Vincenzo Bellini, in ‘Vaga luna che inargenti’ addresses the moon as the sole witness of his longing for his lover and how the moon must convey these thoughts to her.

Bellini: Vaga luna che inargenti (Luciano Pavarotti, tenor; Philharmonia Orchestra; Pierino Gamba, cond.)
The moon isn’t always a beneficent overseer of love, sometimes, it drives people crazy, as in Schoenberg’s Pierrot Lunaire (Moonstruck Pierrot or Pierrot in the Moonlight). In this section, Pierrot, dressed in his best clothes, find a white spot on the back of his coat. He scrubs and scrubs, his evening ruined, but it won’t come off – because it’s a ‘white fleck of bright moon.’