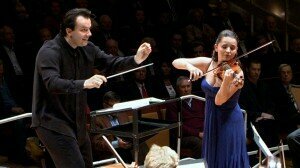 Picture this: A touring orchestra in Travel Hell: one-hundred musicians, a team of staff, a cargo plane full of instruments, sheet music and equipment, unexpectedly brought to a halt. The performance, scheduled years in advance, in a famous concert hall, is that evening.

Shostakovich: Symphony No. 4 in C minor, Op. 43 (Boston Symphony Orchestra, Andris Nelsons)
The last day of the Boston Symphony’s eight-city, twelve-concert 2018 European tour qualifies as a hell-defying marvel. The orchestra was to fly from Paris to Amsterdam on a private charter airline, and perform a colossal program—Bernstein’s Serenade with soloist, Latvian violinist Baiba Skride, and Shostakovich’s Symphony No 4. Scheduling was tight with barely enough time to check out of hotels in Paris, get to Charles de Gaulle airport and through security, fly to Amsterdam, and check into hotels in Amsterdam before the obligatory pre-concert rehearsal—a harried situation. Musicians would have to locate their instruments in trunks stashed somewhere backstage, warm up a bit, test the concert hall acoustics as a group, and change into concert attire. Did I mention there would be virtually no time to have a bite to eat before the concert?

Bernstein: Serenade (Phillip Quint, Bournemouth Symphony Orchestra, Marin Alsop)
An announcement came over the loudspeakers. There would be a 45-minute delay. Food was scarce in the airport lounge except for dry two-day-old sandwiches. The musicians waited calmly until the plane was cancelled one hour later. The staff making frantic calls, weighed options for alternative arrangements to get to Amsterdam with 145 people. A train? Buses? Vans? Cancelling a concert in Amsterdam’s famed Concertgebouw concert hall was not an option. After a few tense hours Luxair determined they could get a plane to the Paris airport sometime late afternoon but it would be a prop plane, too small to accommodate all the musicians. Would two round trips work? 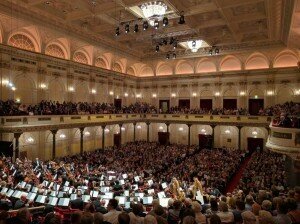 The clock was ticking. The Bernstein Serenade calls for reduced forces—fewer strings, and no winds or brass, but the Shostakovich is another story. It’s huge: four flutes, oboes, and clarinets, eight horns, two tubas, three trombones, four trumpets, six timpani (two players) and nine percussion instruments. The decision was made. The flight would leave with the Bernstein complement and enough wind players to perform—what could they perform on the fly—Beethoven Symphony No. 7 of course! The orchestra hadn’t played it for several seasons but it’s one that every major orchestra knows well.

Beethoven: Symphony No. 7 in A Major, Op. 92 – IV. Allegro con brio (Vienna Philharmonic Orchestra, Nikolaus Harnoncourt)
The smaller group finally took off at 6:40 pm. Concert time was moved to 9:00 pm, nonetheless, the musicians were resigned—there would be no time for hotel check-in, rehearsals, or eating. When they arrived at the hall at 8:15 pm, much to their surprise, the presenters had a quick meal for the tired and famished musicians. Meanwhile, the orchestra librarians had already arranged to download and copy the BSO’s own set of parts to the Beethoven Symphony. One less thing to worry about when playing without a rehearsal.

The musicians were determined to give the audience their best. The soloist shone, and the performance, full of spontaneity and spirit, was a huge success. The musicians left behind in Paris finally arrived by concert’s end around 10:30 pm just in time for the after-concert party hosted by a relieved and proud maestro Andris Nelsons.

What do other orchestras do when faced with a similar situation? I remember a European tour with the Minnesota Orchestra. After a flight delay from Glasgow to Helsinki, we boarded buses to Lahti only to encounter a raging blizzard. Our audience waited patiently for us and violin soloist Joshua Bell to arrive. When our hosts welcomed us with a red carpet and a hot meal we too had a happy ending. I call it our Finnish Finish.
In 1973, as the United States began re-establishing diplomatic ties with China, President Nixon sent the Philadelphia Orchestra to Beijing. Since then the orchestra has performed in China several times including residencies in 2013, 2016, and 2017. But there was a traveling snafu in 2013—a three-hour wait to take off from Beijing to Macao. What do musicians do when they are stuck on the tarmac on a packed, stuffy airplane? A quartet of musicians from the captive Philadelphia Orchestra responded with a spontaneous on-board concert, and performed Dvořák’s American String Quartet beautifully, despite the cramped space.

Philadelphia Orchestra on board concert

A personal travel-hell story stands out in my memory. In 1998 I performed in Aspen, Colorado, which would be followed by master classes in Atlanta, Georgia. It’s about 183 miles from Aspen to the Denver airport. Since the mountainous roads are tricky my husband and I allowed what we thought was plenty of time for the drive. Imagine a medium sized car stuffed with suitcases, computers, carry-on bags, a full set of golf clubs, and the cello! 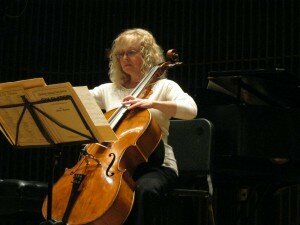 Approximately 50 miles from the airport we came to a complete standstill—trucks, vans, and cars as far as the eye could see. As we inched our way towards the airport my blood pressure inched upward. My first masterclass was that evening.

When we pulled up to the departures lane at the airport it was 30 minutes before the flight. We unloaded as fast as we could. While I checked all the baggage my husband returned the rental car. Then I ran as fast as I could through the airport carrying the cello. Once I got to the security line I brandished my extra ticket and no-one made a fuss for a change.

Sweat was pouring down my face but I made it to the gate just as the last stragglers were walking down the jet way. My husband was nowhere in sight. I pleaded with the stewardess to wait just a moment but she slammed the heavy door and we took off leaving Howie behind.

The Atlanta airport is enormous. I stood with the cello waiting for the bags wondering how I would manage. I couldn’t even lift the golf clubs off the turnstile let alone make my way to the car rental area, and load the car and, I conceded, driving to a suburban college, in darkness, was also daunting. A distinguished looking gentleman caught my eye. Taking pity on me, he insisted on helping me carry everything to the car rental area. While he grappled with the golf clubs and the cello, he mentioned he had a daughter living in Minneapolis. I promised free concert tickets to the Minnesota Orchestra for life for his kindness.

Clutching the steering wheel, I drove as fast as I dared and managed to find the college. The sponsors, not sure if the ‘master’ would appear, had asked a young cellist to go ahead and play his prepared piece. I rushed up the stairs, lugging my cello, to the strains of Elgar Concerto. The playing was so compelling that for the next two hours I stopped worrying about my husband. At 4:00 am Howie quietly slipped into bed next to me and a few hours later, while I taught several lessons, he played eighteen holes.

Maintaining our cool and professionalism is our goal come what may. Rarely does an audience know what has gone on behind-the-scenes. Sometimes they are treated to something unexpected!