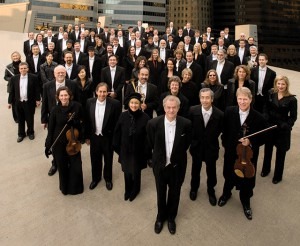 Any veteran musician has some outstanding tour stories to tell. Here is one of mine.
The climax of the 2004 Minnesota Orchestra European tour was our performance in Lahti, Finland at the Sibelius Concert Hall. Our new Music Director Osmo Vänskä, a native of Finland, was coming home— to the very hall that he had performed decades of programs with his previous orchestra. No pressure!

It would be a challenging day for everyone—especially the stagehands. They were up all night loading our precious cargo. Stringent regulations govern travel from the U.K. to Finland and there are myriad details involved to move and set up an entire ninety piece orchestra. Every trunk, every wardrobe armoire, every instrument case had to be listed and numbered on the cartel. Each trunk was thoroughly searched by customs officials.

Our operations staff had the unenviable task of moving the 150 plus musicians, staff, patrons and family members across the globe and to make sure we all were in the right place at the right time. It was a human sized Rubik’s cube. Each traveler was assigned a number that was imprinted on our luggage tag. We were given a colored ribbon—red, green, purple, yellow and orange, to affix onto our suitcases assigning us to groups of about 28 people for the bus travel. Some musicians were on different flights. Pink stars, or blue dots or purple diamonds on their luggage tags identified them. Buses were staggered a few minutes apart to prevent a mob of people descending on hotel staff or to allow musicians with extra set-up time needs to arrive earlier at the halls. 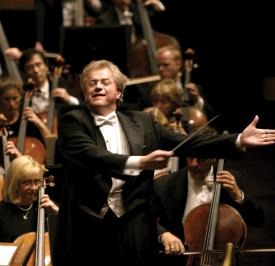 Our suitcases had to be in the lobby of our hotel in Glasgow between 7:30 and 8:30 a.m. and were tagged for the airplane to Helsinki. The five color-coded buses took us to the airport. Everyone had to go through customs and flying time was nearly three hours. At last we all boarded the chartered plane and we pulled away from the terminal. Almost immediately we ground to a halt. A fuel leak had been detected. Although we were relieved that the issue was discovered before we’d taken off, nail biting began — would we make it to Lahti in time? The plane taxied back to the gate for repairs. An hour passed. Anxieties heightened. At last the repairs were completed and the plane was able to take off. The trip was uneventful but the landing in Helsinki was frightful. We descended from the plane onto the tarmac only to be battered by a ferocious blizzard. Was this a cruel joke? Were we in Minnesota?

A ninety-minute bus ride was still ahead of us. Snow pelted the buses as we careen along the treacherous route. Visibility was minimal. With nervous stomachs we pulled into the parking lot at Sibelius Hall at 6:30 p.m. Concert time was 7:30 p.m. The locals had eagerly anticipated our arrival. As we stepped off the buses there they were with bright lights and TV cameras. The musicians were led along a snow-covered red carpet to the stage door. But there was no time to bask in glory. We only had an hour to wolf down a little food, change into concert clothing and squeeze in a fifteen-minute sound check for the international radio broadcast. 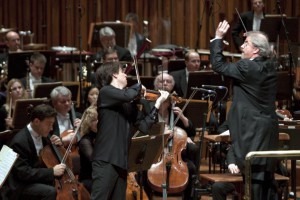 Sibelius Hall is gorgeous in birch wood panels that enhance the sound. The hall is designed with enormously long hallways between the concert stage and the dressing rooms. We ran from one end to the other to get dressed, to retrieve our instruments and to take our places onstage.

Somehow we managed to get ready for what turned out to be the most memorable evening of the tour. The hall was packed with enthusiastic well-wishers, family and friends of Osmo, Lahti symphony members and several prominent board members, staff and patrons of the Minnesota Orchestra who had journeyed to Lahti for the evening.

Joshua Bell was the brilliant soloist in the Tchaikovsky Violin Concerto followed by the magnificent Romeo and Juliet Suite by Serge Prokofiev, a work that dazzles with its orchestral colors and pyro techniques. We played our hearts out.

Osmo addressed the audience in both English and Finnish to introduce We Are Met at Gettysburg by Minnesota composer Steve Heitzig in memory of a benefactor of the orchestra. There wasn’t a dry eye in the house at this point in the evening.

After countless curtain calls we launched into a Finnish folk song, which made everyone laugh and clap along with glee. An unexpected encore followed. Although it was a closely guarded secret, we knew that it was Osmo’s birthday. He turned to us and motioned for the orchestra to stand for yet another bow but instead, we lifted our instruments and played Happy Birthday. Stomping feet, smiles mingled with tears and thunderous applause brought our exhilarating and successful European tour to a close. 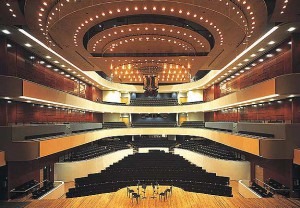 A sumptuous dinner party in the lobby followed, thanks to the city of Lahti. Finnish and American musicians, Finnish and American patrons, and family and friends all mingled until well past midnight. Music truly transcended the need for language. We didn’t want the evening to end.

In the wee hours of the morning we piled back onto buses for the ninety-minute ride to hotel rooms in Helsinki from where we flew home to Minnesota.

This tour was by far the most grueling and demanding of my career and the most satisfying. We began on a high note with accolades in New York’s Carnegie Hall and the crescendo continued throughout the tour. The orchestra never let down and each performance was better than the last, all the way to the memorable evening in Lahti.

Osmo summed it up in a few brief words— every member of the Minnesota Orchestra team— the staff, the stagehands, the management, the musicians, the solo artists, the doctor, the families and patrons did their part— a superlative team indeed, making this tour the exemplary success it was. We knew we would continue the high levels of excellence we achieved back home!