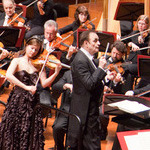 BEIJING — Grant Xia had the misfortune of trying to take up violin as an amateur during the collective madness of the Cultural Revolution. Chinese officials banned classical music and sent musicians to re-education camps. Mr. Xia’s family collection of more than 1,000 vinyl records was destroyed. Mr. Xia soon stopped playing the violin.

Then, in 1973, as the United States began re-establishing diplomatic ties with China, President Nixon sent the Philadelphia Orchestra to Beijing. It was the first time an American symphony orchestra had performed in China since the Communists won the civil war in 1949, and it helped pave the way for a return of Western art and culture to China when the Cultural Revolution ended three years later.

“I was moved and inspired,” Mr. Xia said of the snippets of the performance he heard on the radio. “I would have given anything to be there.”

Mr. Xia was speaking 37 years later, on Tuesday night, in the audience in Beijing as the Philadelphia orchestra played Tchaikovsky’s most well-known (and difficult) Violin Concerto in D major, along with rousing pieces by Rachmaninoff and Ravel. The performance unfolded while a rainstorm doused the grand domed theater off Tiananmen Square commonly called the Egg, or more formally the National Center for the Performing Arts.

It was the opening night of the orchestra’s latest diplomatic mission to China: its performance in Shanghai on Friday, at the Chinese government’s invitation, as the first foreign ensemble to play at the 2010 World Expo.

The China concerts are part of the orchestra’s Asian tour, with stops in South Korea and Japan.

In Beijing, audience members shouted “Bravo!” after Charles Dutoit conducted the first night’s program, the one Mr. Xia attended, and clapped wildly the next night too, after the orchestra performed Stravinsky’s entire “Firebird” ballet and “The Rite of Spring.”

Since the 1973 performance, the orchestra has returned five times to China, most recently in 2008 for a 35th anniversary tour, where it was joined by Lang Lang, China’s celebrity pianist.

For older audience members at the concert on Tuesday, the 1973 performance was on their minds, even if they did not attend it.

“For Chinese music lovers of a certain age, we feel a special emotional connection with the Philadelphia orchestra,” said Yao Ji, who was in his teens at the time. “Listening to classical music was a political activity at the time, it was so difficult to find. But then the orchestra came, and we felt as if spring were almost here.”

The original performance was managed by Mao’s infamous wife, Jiang Qing. She insisted that Beethoven’s Fifth Symphony be swapped out for the Sixth. Eugene Ormandy, the orchestra’s conductor at the time, detested the piece and refused to play it. But after much wrangling, Mr. Ormandy gave in.

Orchestra librarians scurried to find copies of the music in Beijing, and finally additional copies were flown up from Shanghai. There were no orchestras in China at the time the size of Philadelphia’s, so sufficient sheet music was scarce, said Nicholas Platt, an American diplomat on the trip, during a conference at the Asia Society earlier this year.

The copies were full of inconsistencies, but the musicians knew the piece well enough to play it from memory, said Herold Klein, a violinist who was 28 at the time. Mr. Klein is one of eight musicians from the first tour who is still with the orchestra today.

The audience clapped politely after the concert in 1973. “They looked like they had just heard something completely strange,” Mr. Klein said.

Later, the musicians were riding buses back to the hotel when military vehicles sped past and screeched to a halt, cutting them off in the middle of the road.

“One guy got spooked, I remember,” said Anthony Orlando, a percussionist. “He went screaming off the bus. I guess it was too much Big Brother for him.”

It turned out that Madame Mao had just wanted a photograph with the musicians and to hand them little packets of flowers.