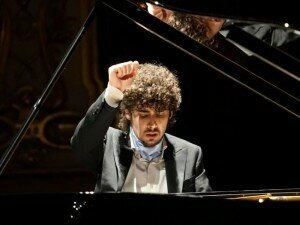 The concert pianist cuts a romantic, almost mysterious image: alone on the stage with only a shiny black minotaur of a concert grand for company, the pianist exists in a place other than ours, elevated – both physically and metaphorically – before us. We invest special heroic qualities in the pianist, knowing that he/she must convey supreme mastery and complete oneness with the music by playing from memory. Pianists are like Himalayan adventurers, scaling the highest peaks without a safety net: triumph or fail, they do so in the very pubic sphere of the concert hall.

A concert is not called a “performance” – and its participants “performers” – for nothing. Like an actor inhabiting a character created by a playwright, so the musician takes on a special role for the duration of the concert. Like actors, they also wear special clothes for the occasion, which further defines their role, and the occasion occurs in a special building, often in darkness or semi-darkness. Thus the concert becomes an experience outside the realm of daily existence – for audience and performer.

The mystique of the performance begins as the house lights dim, the unspoken signal to the audience to fall silent. A palpable sense of expectancy permeates the concert hall, and the shared adventure of the performance begins as soon as the pianist crosses the stage. The applause, the audience’s way of greeting the performer, and, in return, a bow, the performer’s way of acknowledging the audience. There is no enmity: for the next few hours we are, to quote British pianist Stephen Hough, “all friends”, sharing in the experience, our many differences forgotten for the duration of the concert.

Schubert: Sonata in G, D. 894 – I. Molto moderato e cantabile (Richter)
The moments before the performance begins resembles nothing else. One has a sense of the awesome formality of the occasion, the responsibility, the knowledge that, once begun, a performance cannot be withdrawn. Silent, poised at the piano, at that moment the pianist has complete control over our reactions:

I sit down, and I don’t move a muscle. I create a sense of emptiness within myself, and in my head I count up to thirty, very slowly. This causes panic in the audience: ‘What’s happening? Is he ill?’. Then and only then I play the G [of Liszt’s Sonata]. In this way, the note sounds totally unexpected, but in an intentional way. Clearly, there’s a sort of theatricality about this, but the theatrical element seems to me very important in music. It’s essential if you want to create a feeling of unexpectedness….
The unexpected, the unforeseen – it’s this that creates an impression

The best performers (and I don’t necessarily mean the most famous or technically assured) are the ones who take us into their confidence, creating an unspoken mutual connection through music. They weave stories for us, create magic, transport us to another place and allow us to forget ourselves and the tedious minutiae of our daily lives.

The pianist’s mystique and the ritual of the concert create a unique connection in time and place between the performer, the music and the audience.

Today, when presenting classical music seems to be all about “accessibility”, the mystique of performance can be lost in the desire to “connect” with the audience “extra-musically”, so to speak, by talking to the audience, for example, to break down barriers. It’s great to enjoy classical music in a more relaxed setting; it’s interesting when the performers introduce the programme, discuss their particular connection to the music, or why they selected it. This can work especially well in smaller venues where the audience and performer are in close proximity. But talking to the audience pre-concert in a big hall is problematic without proper amplification, and the big venues almost naturally lend themselves to a more formal, mystical concert experience. And I think audiences like performers to actively create a sense of mystique – because we know we are mere mortals in the face of such superhuman ability.

Liszt: Les jeux d’eaux a la Villa d’Este (Garrick Ohlsson)
The most startling thing can be meeting a concert pianist “off duty”, so to speak. Some years ago, I interviewed a concert pianist at his fairly modest home in leafy suburbia. The mystique was dispelled the moment the pianist answered in the door. I remember he was wearing navy socks, and his piano room was not the Lisztian salon I had imagined (all crimson swags and a bust of the composer for inspiration) or an ascetic monkish cell, but a tidy “office” equipped with the tools of his trade – a grand piano and a career’s worth of scores neatly lining one wall. The virtuoso at home! This person had kids, and a friendly cat, a mortgage to pay and a car to service: in truth, he was disappointingly ordinary. I had imagined something, someone, more esoteric, and his very ordinariness was a shock – he regarded the fine art of creating beautiful music for others to enjoy as nothing more than something he did day to day, nine to five, just like any other job. In fact, most of the professional musicians I have met are normal people – and they “normalise” the incredibly artistic and highly intellectual thing that they do on stage in order to function day to day and get their work (practising) done. Because for them, music is their job. But of course what marks them out is their ability to transform the normal into the beautiful, the transcendent, the magical……and if we want to preserve that mystique, maybe it is better we don’t meet our pianistic heroes and heroines.

…the further a performance must travel to reach the origin of the music, the more the artist demonstrates the measure of both his conscience and his genius
Mark Mitchell, Virtuosi!