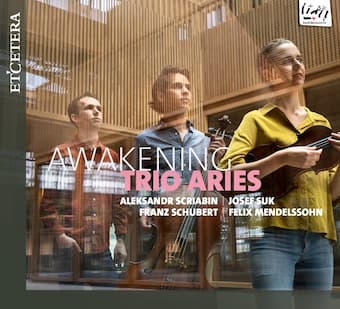 The Trio Aries, founded in Belgium and active since 2018, just released their first album, the fruit of their winning the Supernova chamber music competitions in February 2020. One of the special prizes that came with being declared Supernovas was a CD recording which has just been issued by Et’Cetera.

They start with Alexander Scriabin, and a transcription of his étude for piano in C sharp minor, Op. 2/1. Even from this first track, we can see what the piano trio can do together. They take Scriabin’s romantic but pedantic work and imbue it with a sense of Russian romanticism. 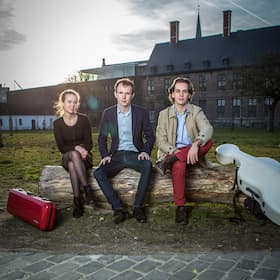 Josef Suk was a favourite pupil of Antonín Dvořák and in 1898 married his daughter Otilie. This piano trio, Op. 2, was written when Suk was barely 15. A violinist, Suk played in a piano trio with a local doctor and his daughter. He wrote the work in 1889 for their trio, and then revised it on the suggestion of his teacher at the Conservatory and it was performed in 1891. He then started study with Dvořák and further revisions were made to the work. It opens with a strong set of descending chords before launching off into a dotted rhythm ascent.

Franz Schubert wrote only two piano trios, but like so much that Schubert accomplished in his short life, they were among his greatest works. Preceding those, which were created very much with the model of Beethoven’s Archduke Trio, was a single movement piano trio that he wrote under the guidance of Antonio Salieri. Written in 1812, probably as a study piece, which is why there are no other movements, the work shows Schubert’s awareness of the possibilities inherent in the piano trio form. Schubert had shown the first draft to his friend Ferdinand Hillier who encouraged him to be a bit wilder, adding syncopations and writing music that was more demanding of the soloists.

The final work on the recording is Felix Mendelssohn’s Piano Trio No. 1 in D minor, Op. 49. Created for the violinist Ferdinand David, to whom Mendelssohn would dedicate his Violin Concerto in E minor, with the cellist Karl Witmann, and himself on the other two parts. He wrote the Trio during the summer of 1839 while in Frankfurt and it was the subject of Robert Schumann’s approbation. Although the first movement begins in a Mozartian style, it soon comes over to the Romantic side with its tempestuous outbursts mixed with a wildly lyric line.

The second movement, Andante, is a lyrical and flowing Mendelssohnian song without words. 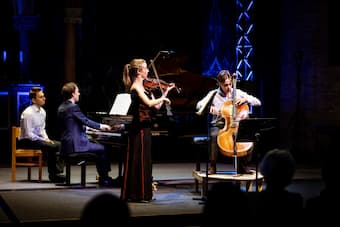 The Scherzo third movement brings us back to what Mendelssohn does best: a mixture of the delicate and frantic.

The final movement seems to summarize the previous three movements, but with a fire that truly belongs in the final movement. One writer summarized Mendelssohn’s style as being melodic, enflamed, and whimsical and all three elements come out here.

The Trio Aries, unlike most small chamber ensembles, trained in different conservatories in different countries before coming together in their home country. Violinist Alice Van Leuven studied at the Universität der Künste in Berlin, cellist Paul Heyman at the Zürcher Hochschule der Künste in Zurich, and pianist Wouter Valvekens at the Royal Academy of Music in London.

A new trio takes on new trios… and delivers an album of jewels.