For an instrument that is said to rule over all the other family members in the vast empire of musical instruments, the organ does not get much prominence or recognition.

Outside popular pieces like the Toccata and Fugue in D minor by Bach, and the Toccata from the Symphony for Organ No. 5 in F Major by Charles-Marie Widor, and Camille Saint-Saëns’ Symphony No. 3 , when do you ever get to hear the organ?

While many concert halls around the world proudly portray a massive pipe organ that sits prominently and majestically above or behind the stage, in how many concerts a year do you get to hear this king of instruments?

Just in case you are not overly familiar with the king of instruments, here is a short video from the Berlin Philharmonic that explores many aspects of its functions and sounds.

It is surprising considering how many types, styles and sizes of organs there are in the world that it is not more popular in concert halls. Take a look at this little beauty called a Medieval Portative Organ. Its sound is so enthralling and quite unique. Then there’s the World’s Largest Mechanical Pipe Organ in the Holy Trinity Cathedral Liepāja in Latvia. What a monster. 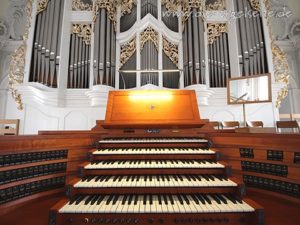 Due to the large variety of sounds an organ can make, it easily adapts symphonic works to its medium. How about Beethoven’s Fifth on a church organ? For a player, it’s organs like these which can give your whole body a good workout. Here’s Gustav Holst’s Jupiter from his suite The Planets.

I don’t know anything that compares with a grand pipe organ in full flight. The sheer volume and massive combination of sounds are breathtaking. César Franck’s Choral in A minor is a work that lets you hear how powerful an organ can be. Rachmaninoff’s Prelude in C sharp minor has never sounded better than in this organ version.

Considering the unpopularity of organ music, why are there so many organs around the world? Yes, they are big, expensive and take many years to learn how to play well, but the sheer variety of sounds they create means they can fill in for an orchestra. Orchestras are much more expensive and as most conductors know, it’s difficult to get a good sound out of them.

Australia has around 2000 pipe organs; most are in churches. But, they can also be found in concert halls, universities and town halls. In some picture theatres, you will find The Mighty Wurlitzer Organ, and in private homes, there are many more. I had an electric Yamaha organ when I was younger. Almost every digital keyboard today comes with a variety of organ sounds; that’s one thing they do well.

Europe is the home of churches and pipe organs. Just in the United Kingdom alone, there are over 30,000 pipe organs. So there’s no shortage of instruments, it’s the music we are lacking.

Modern music for the pipe organ is in short supply. I’ve only ever written one work for it. However, covers of pop music are regularly adapted for the organ, like Michael Jackson’s Beat It, played here by the self-taught and blind pianist and organist Kuha’o Case.

Where would the horror movie genre be without that great, scary and suspenseful eerie organ? Phantom of the Opera, The Unmasking. Accompanying silent movies is where the organ shines. Rosa Rio was the stage name of the American concert pianist, who provided scores and arrangements for theatre and other entertainment mediums. Her music and playing were synonymous with the silent movie era and for radio plays like The Shadow.

Australia too has a well-known organist. But this guy is so funny it’s hard to concentrate on his musical talent. I give you the one and only Barry Morgan.

The Great Organ is more than an instrument, it’s a life force. They inspire composers to do extraordinary things. Because of the religious connections to much organ music, composers seem to put an extra effort into what they create for the organ. An odd thing about organ music is that when you hear it, it stops most thoughts and actions happening around the music; unless it’s a walk down a church aisle to that famous Wedding March by Mendelsohn.


Organs have inspired composers for centuries. The majestic and eye-catching Great Organ of St Bavokerk in the Netherlands was played by none other than Handel and Mendelssohn, and, even Mozart. At the time of its construction around 1738, it was the biggest pipe organ in the world.

Apart from being an instrument that has the capacity to blow the top of your head off through its incredible volume, the organ can be a contemplative instrument. You can hold a note for a long as you want, which makes for some meditative sounds. JS Bach’s Pastorale in F Major BWV590 is a piece that shows the introspective capacity of the organ. When I was younger, I used to think that there was no sound better for falling asleep to. Now, the music of the organ keeps me enthralled.