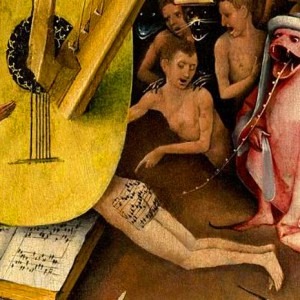 Music is supposed to be a gift from Heaven. We have all seen beautiful paintings where the dove—representing the Holy Spirit—whispers sweet melodies into the ear of Pope Gregor. Gregor immediately started to write down these heavenly melodies and codified a whole new musical genre known as “Gregorian Chant.” And of course, there are all manner of angels sitting around on assorted clouds playing harps, lyres and various trumpet and horns. But the real question is, is there music in hell? While some might consider serial compositions or hip-hop chanting hell on earth, the early Dutch painter Hieronymus Bosch (1450-1516), famous for his macabre and nightmarish depictions of hell, had some very concrete ideas what the eternally damned had to listen to in terms of music.

Little is know of Hieronymus Bosch. He certainly never shared his thoughts on the meaning of his art. We do know, however, that he lived all his life in or near ‘s-Hertogenbosch, a city in the Duchy of Brabant. His grandfather and father were both painters, and in 1488 Hieronymus joined the “Illustrious Brotherhood of Our Blessed Lady.” A staunchly conservative religious confraternity, the brotherhood was organized around a carved wooden image of the Virgin Mary in St. John’s Cathedral in ‘s-Hertogenbosch. Hieronymus Bosch was a respected artist during his lifetime, and he received a number of commissions from abroad. He was widely copied, particularly the fantastic imagery and illustrations of moral and religious concepts and narratives. Although art historians still hotly debate the precise meanings of his often-macabre imagery, Bosch clearly offers deep insights into man’s desires and deepest fears. 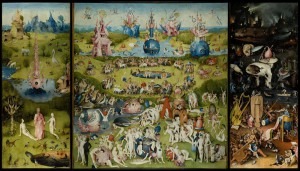 Bosch painted at least sixteen triptychs, with his most famous “The Garden of Earthly Delights” dating from between 1490 and 1510. The three panels are read chronologically from left to right, and in the left-hand panel God is handing a fantastical landscape to Adam and Eve. Exotic animals and swarms of insects gather around semi-organic structures. In the central panel, Bosch depicted a buzzing panorama with socially engaged nudes. Oversized imagined animals and fruits, and hybrid stone formations provide the background to a seemingly innocent orgy of self-absorbed joy. And you can already guess what is happening in the right panel! Those who have been unable to resist the temptations of pleasure and earthly delights are reaping their just rewards in the eternal damnation of hell. Represented by the right panel, hell is a dark place full of tortured and contorted naked human figures. Whether it involves fighting off the amorous advanced of a pig, being penetrated by an alien contraption or sitting naked on a saw blade, hell is certainly not a nice place in Bosch’s imagination!

Recently, a music student at Oklahoma Christian University noticed“…music written upon the posterior of one of the many tortured denizens of the rightmost panel of the painting which is intended to represent Hell.” A lizard creature with human feet and a panther with bony fingers lead a number of condemned souls in a bit of hellish chant. The graduate student went to work and transcribed the notes, and a number of devilish versions have already been recorded. Just listen to the impossibly large intervals skipping about and the complete and deliberate avoidance of musical modes. It’s 12-tone music from the 14th Century. Truly gruesome and hellish, don’t you think?