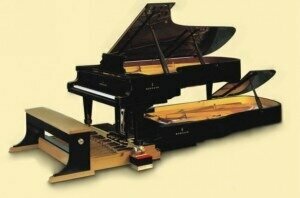 The history of musical instruments is full of ingenious ideas that for one reason or another did not enter the commercial mainstream. Take for example the pedal piano, a keyboard instrument featuring an additional pedalboard played with the feet. The idea of attaching a pedalboard to a keyboard originates in the 15th century, and we do know that J. S. Bach owned and composed for such an instrument. The same is true for Wolfgang Amadeus Mozart, who also owned a fortepiano with independent pedals. And Robert Schumann, enthused by the possibilities of the “Pedalflügel,” composed a number of compositions that until recently had to be performed on the organ or in various transcriptions. In addition, Franz Liszt, Charles Alkan, Charles Gounod and Camille Saint-Saëns also explored the unique qualities of sound offered by this instrument. None of these famous composers and performers, however, could reasonably have imagined or predicted the utterly magnificent evolution of the pedal piano in the hands of Luigi Borgato.

Luigi Borgato started his piano-making career in the workshop of Paolo Fazioli. Obsessed by the desire to build each instrument entirely by hand, and to personally select the woods and all materials and components for construction, Borgato and his wife Paola Bianchi established their own workshop in Lonigo, in the province of Vicenza. Their first grand piano, the Borgato L282 “Grand Coda” was introduced in April 1991, and created an instant sensation. But it was not merely the exceptional craftsmanship and the exquisite materials and components that fascinated performers and listeners alike, it was Borgato’s ingenious reinterpretation of history that created the real stir. When Ludwig van Beethoven gradually started to loose his hearing, he got in touch with the Viennese builder Conrad Graf. Beethoven was looking for a fuller and more powerful sound from the treble register of the fortepiano. As such, he suggested to increase the number of strings for each treble note to four, instead of the usual three. To my knowledge, this particular instrument was never built, but almost 200 years later Luigi Borgato reawakened the concept. His Borgato L 282 features four strings per note for the 44 keys of the upper register of the keyboard. This fundamental design change has transformed the soundscape of the grand piano. No longer brittle, metallic and exceedingly thin in the upper register, the Borgato L 282 exhibits an intensely powerful, rich, and characteristic sound throughout its entire range.

When you superimpose the Borgato L 282 concert grand on top of a Borgato P 402 concert grand activated by a pedalboard of 37 pedals, you not only get the magnificent “Doppio Borgato,” but a veritable work of art. A resonance pedal applied to the lower piano joins the two instruments at the navel, and once activated, it simultaneously operates the damper mechanism on both instruments. The lower P 402 is played by the performer’s feet, just like an organ, but retains the expressive qualities of the piano.

Introduced in 2000, this true hybrid affords the exploration of a brand-new musical universe. A number of contemporary composers, among them Cristian Carrara, Michael Glenn Williams, and Ennio Morricone have already taken advantage of the unique sound qualities offered by the “Doppio Borgato.” Finally, we are also able to hear the works for pedal piano composed by Schumann and Liszt as their composers intended. As you might imagine, reenvisioning history does not come cheap. The Borgato L 282 will cost you more than $200K, while the “Double Borgato” will set you back by at least $320K. Worth every penny, I should think!