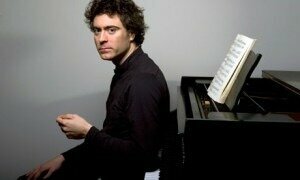 Paul Lewis, protege of the renowned pianist Alfred Brendel, has in some ways followed in his master’s footsteps, making a name for himself performing all 32 of the Beethoven piano sonatas while on tour in the United States and Europe between 2005 and 2007; and then going on to become the first pianist to perform all five of Beethoven’s piano concertos in a single season of the Proms.

Having focused intensively on Beethoven’s works for almost a decade, Lewis challenged himself again in 2011 when he embarked on an ambitious two-year world tour, performing all of Schubert’s late solo piano works.

One can’t deny the Classical affinity: Brendel has long been regarded as the greatest interpreters of Beethoven, Schubert and Mozart; Lewis, has by now completed core works by Beethoven and Schubert to much critical acclaim.

Lewis and Brendel first met when the former, as a 20-year old student at Guildhall, was asked to play a Haydn sonata at a tutorial Brendel gave at the college. At that time, Lewis’s interest in the Classical works had just begun, having played many late Romantic works up to that point. His discovery, as well as that fateful meeting, probably helped cement the type of music he wanted to make for his career.

Having spent the last few years focusing on Schubert’s music, Lewis returns to Beethoven this season, playing Beethoven’s Piano Concerto No. 3 in C minor, Op. 37 in one of two performances with the Czech Philharmonic Orchestra in Hong Kong earlier this month. At the other performance, instead of another of the classics, he chose Brahms’ Piano Concerto No. 1 in D minor, Op. 15.

“It’s a fantastic piece. It has a great symphonic character, and the piano really becomes a second orchestra sometimes, but there’s a lot of intimate, tender playing as well,” said Lewis of the Brahms. “That’s the beauty of it, it has such a huge range that it’s not just one thing, it’s many different things in one.”

With only two Brahms piano concertos to choose from, Lewis picked the No. 1, a piece that he had first come across as a little boy, sifting through album after album at the local public library in Liverpool. He spent evenings poring over the black vinyls, discovering Beethoven, Mozart, and also Brahms No. 1 on the way.

“I really loved it since I first heard it as a boy and it was something I always wanted to play. I just wanted to choose the right time to play it,” he said. 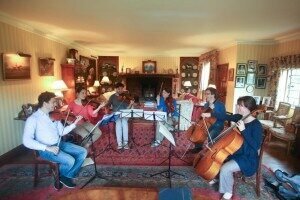 The right time appears to be now, as Lewis takes a break from single composer series, and moves on to playing, and recording, a more mixed repertoire. Not only has he performed Brahms Piano Concerto No. 1 regularly this season, he has also just recorded the work recently in Stockholm with the Swedish Radio Symphony Orchestra and Daniel Harding just before heading out on the Asia tour with the Czech Philharmonic Orchestra. Another regular this season is Mussorgsky’s Pictures at an Exhibition, a work that Lewis has performed at least 30 times around the world as part of a recital program.

Lewis’s decision to join the Czech Philharmonic Orchestra on their Asia tour is two-fold. We have all heard of falling out stories when the orchestra and the soloist don’t see eye to eye, but Lewis and chief conductor Jiří Bělohlávek have known each other since they recorded Beethoven’s complete piano concertos in 2010. Since returning to helm the Czech Philharmonic in 2012, Bělohlávek, Lewis and the orchestra have had a great working relationship, and this is one of the reasons why Lewis agreed to be on tour.

Lewis himself stated at one point the difficulty of working with an unfamiliar conductor, and said that there were certain pieces he would not perform on a first time collaboration, including Beethoven’s Piano Concerto No. 4 in G major, Op. 58.

The idea of performing in mainland China also appealed to Lewis, who has not visited China extensively, although he has performed in Beijing and Hong Kong previously. The Asia tour with the Czech Philharmonic saw Lewis and the orchestra play to large audiences in four of China’s biggest cities, including Shanghai, Beijing, Hong Kong and Guangzhou.

But while the Czech Philharmonic Orchestra performed many Czech favorites, including Smetana’s “Vltava” from Ma Vlast, to even lesser known works such as Martinu’s Symphony No. 4, Lewis himself is not a particularly enthusiastic supporter of nationalistic music, viewing it as only a matter of belief.

“I’ve always had a fascination with borders,” he said. He recalls visiting South Korea once, standing at the border and looking over to where North Korea lies, a short distance away.

“I find it very unnatural, the way land is divided up by putting a line across it,” he said. “This side is one country, and that side is another, and how because of this intangible line, life on either side can be quite different.”

How did he feel then, about the Czech compositions in the Asia tour programme? He laughs, saying he’s not performing them. He doesn’t play nationalistic music.

As an afterthought he adds, “Smetana’s work isn’t so nationalistic, as it is more descriptive of the land rather than the belief.”

After the Asia tour, Lewis was back in the United Kingdom from 13 – 15 June for the Midsummer Music Festival, which he founded with his wife Bjørg Lewis back in 2009. The festival, spanning three days and located in the Chiltern Hills in Southeast England was something Lewis really wanted to do: to bring top quality classical music to that part of the country and also to expose children to classical music through its outreach programme.

“We dedicated a small part of the festival to expose children to classical music, it’s important to have music education,” he said. Even when people move away from classical music as they grow up, Lewis is convinced that “once people reach a certain age, it’s very inspirational to have taught children about classical music because it all comes back to them.”

There remains no short-term plans to expand the much anticipated festival, and both Lewis and wife Bjørg were quite content with keeping the festival small and ‘home-made’.

“We all feel strongly that to keep the scale manageable and the quality high is our top priority,” they said in a joint statement on the official website.

This year’s festival included a star-studded line up, including violinists Henning Kraggerud and Alexander Sitkovetsky, Lars Anders Tomter on the viola, Christoph Wimmer and Bjørg Lewis herself on the cello, Alasdair Beatson and Lewis himself on the piano, and tenor Mark Padmore.