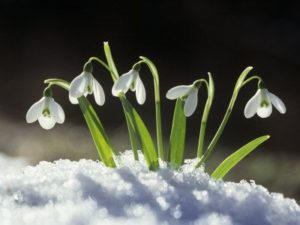 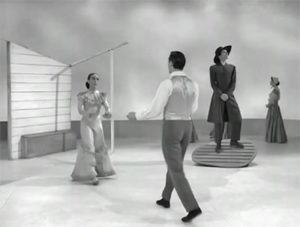 Martha Graham as the Bride in Appalachian Spring

We’ll start with one of Johann Strauss II’s most famous waltzes, Frühlingssimmen (Voices of Spring), and unlike so many of his waltzes, this really is a voice of spring, as there’s an obbligato soprano line. Some times it’s performed by orchestra alone, but the addition of the voice makes it so much more interesting. The text is about the various birds who have returned, starting with the lark, ‘rising into the blue,’ and then to the evening bird, the nightingale. The bird song carries the song of spring and of love. 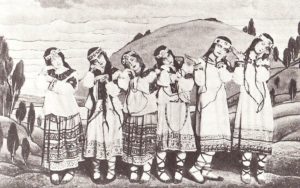 Leaving 19th century Vienna, we go to 19th century Pennsylvania, via 20th century Brooklyn. Aaron Copland’s ballet Appalachian Spring is about the season Spring, but the Spring in the title is a water source. The story is of a Spring celebration but is a larger metaphor for the conquering of the American West and the strength and fortitude required of the pioneers. 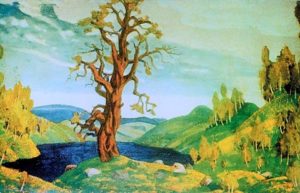 Now to Russia, and one of the most violent of the spring celebrations. Igor Stravinsky’s The Rite of Spring takes us back to the land before time, a land of omens and portents, where sacrifices must be made. The work’s infamous and shocking premiere in 1913, which ended in a riot and reportedly had to be quelled by police, only added to the reputation of both Diaghilev’s Ballets Russes company and the precocious young Stravinsky. His beautiful Firebird of 1910 was just a memory when the dancers in their rustic gowns took the stage to the laughter of the audience. And, then, to have the beautiful heroine dance herself to death as the sacrifice? That just wasn’t done on the Paris ballet stage.

Stravinsky: The Rite of Spring: Part I: Adoration of the Earth: The Augurs of Spring (Dance of the Young Girls) (Philharmonic Orchestra; Robert Craft, cond.) 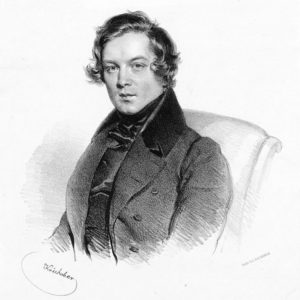 Back to Germany and to the 19th century. Robert Schumann’s Spring symphony had its beginnings when he found Franz Schubert’s ‘entirely unknown and unperformed’ Symphony in C major, D. 944, which eventually took the name ‘Great.’ Schumann got Mendelssohn to conduct the premiere in Leipzig and then heard the work five more times – he heard in the work an originality that took it beyond that great symphonic stumbling block of Beethoven. And, as Schumann was frequently inspired by literature, he found a poem by Adolf Böttger with the evocative line: Im Thale blüht der Frühling auf! (Spring bursts into flower in the vale). With his musical and literary sparks in his mind, he started his first symphony, and completed it in February 1841. He gave the score to Mendelssohn and the work received its premiere in Leipzig in March to great acclaim. He gave each movement a heading (Spring begins – Evening – Merry playmates – Spring in full bloom) to take us from the first hint of spring to its full realization.