Isaac Albéniz (1860-1909) joined with Enrique Granados and Manuel de Falla to bring Spain back into the international musical spotlight. The Spanish style they created came to define Spanish music – even being imitated by more than one French composer who sought to create the world of the country to the south.

Melody and rhythm, forms and idioms of Spanish music came to the rest of Europe via not only piano music but also guitar music and orchestrations. It was only through the subtle qualities of the orchestrations that some of the piano music found its fullest realization. The floridity of Spain might overwhelm the piano but the orchestra could add the needed colour.

Albéniz’ Cantos de España, Op. 232, written in two parts, with the first 3 movements completed in 1892 and the last two movements in 1898, was seen as a strong advancement of Albeniz’ style, particularly in its harmonic richness.

Andalusia is the core of work, and it is in the fourth section that we arrive at Albeniz’ favourite city in Andalusia, Córdoba. Córdoba, the heart of Andalusia, has a dual history, based on its Christian and Moorish histories. We open with the most Christian of sounds, church bells tolling and an open sound not unlike liturgical singing – it could be a procession of monks, but the section closes the sound with typical folk instrument, the one-string gusla, playing a Moorish-sounding serenade. Flamenco dancers pick up the tempo and Spanish folk song rhythms enter. The first section repeats and so we see the cycle of time in Córdoba – the dark morning hours, the people as life and dancing go on, to return to the dark procession.

This isn’t as much a piano piece as a tone poem of life in Córdoba. Each listener can pick the elements that appeal – from the meditative start to the lively second section that returns at the end. Day and night, secular and sacred, all have a play in Albéniz’ vision of Córdoba.

The pianist on this 1957 recording, Michel Quéval (1929-2005), was a ballet conductor with the Théâtre National de l’Opéra de Paris in addition to being a pianist and composer. As a ballet conductor, he worked with the most important choreographers, from Balanchine and Cunningham to Nureyev, and led orchestras all over Europe. 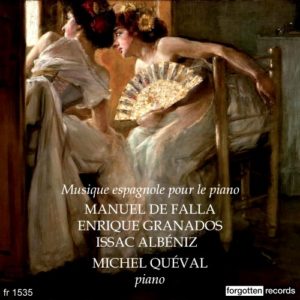