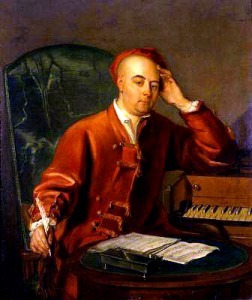 Can you imagine a musical universe without performances of the Messiah, Samson, Jephta, the Water Music and Music for the Royal Fireworks? These highly popular compositions might never have existed in the first place, because George Frideric Handel got into a deadly duel with Johann Mattheson in 1704! It so happened that the score of Mattheson’s opera The Misfortune of Cleopatra fortuitously saved Handel’s life. But let us start in the beginning.

Johann Mattheson, at age 22, had already established himself as a musical authority in his hometown of Hamburg. A prolific instrumentalist, composer, teacher and acclaimed singer at the Hamburg opera, Mattheson was not inclined to be upstaged by the 18-year-old upstart from Halle. He nevertheless took the young Handel under his wing. He reports, “In the summer of the year 1703 Handel came to Hamburg, rich in abilities and good intentions. I took him to the organs and choirs of the town, and to the operas and concerts. At first he played the second violin in the orchestra of the opera, and seemed as if he could not count above five; in fact, he was naturally much inclined to dry humour. But, one day, when a harpsichord player was wanted, he allowed himself to be persuaded to take his place, and showed himself a man.” Mattheson was less complimentary when it came to Handel’s early compositions. “He composed very long, long airs, and almost endless cantatas, which, although the harmonious treatment was perfect, nevertheless had not the requisite fitness.”

In the summer of 1703, Mattheson was invited to apply for the organist position in Lübeck, vacated by Dieterich Buxtehude’s retirement. Mattheson took Handel along for the journey, and they passed the time by composing a number of double-fugues. Upon arrival, “we tried almost all the organs and harpsichord in Lübeck, and arranged between ourselves that he should play exclusively on the organ, and I on the harpsichord. But when we found that a certain marriage, for which neither of us had the slightest inclination, was a stipulated condition with the appointment, we departed thence.” Back in Hamburg, Sir John Wich, Knight and Royal Ambassador of Great Britain, engaged Mattheson to teach and tutor his young son Cyril. Apparently, Handel had actually expected the appointment for himself, and according to Mattheson, it “gave occasion for jealous looks.”

Hamburg saw the premiere of Mattheson’s opera The Misfortune of Cleopatra in December 1704. The composer himself sang the role of “Anthony,” and gloriously died on stage in Act III. With Mattheson on stage, the popular Hamburg composer Reinhard Keiser, with over a hundred operas to his name, was supposed to conduct the evening from the harpsichord. However, Keiser had a bit of a gambling and drinking problem and left the performance half way through. Handel, at that time, was playing second violin in the orchestra and when Keiser unexpectedly departed, he took over on the harpsichord and the conducting duties. Once Mattheson’s character had died on stage, the composer was ready to take over the musical reins; but Handel was already there, and he would have none of it! The ensuing argument, fueled by what Handel saw as the stealing of the pupil Cyrill Wich, disrupted the performance. As the argument reached fever pitch, Mattheson suggested that they take their disagreement outside. Swords were drawn and Mattheson directed a powerful thrust at Handel’s chest. The first Handel biographer John Mainwaring reports, “Mattheson made a push at him with a sword, which, being aimed full at his heart, would for ever have removed him from the office he had usurped, but for the friendly score which he accidentally carried in his bosom; and through which to have forced it, would have demanded all the might of Ajax himself.” An alternate account of the incident suggests that Mattheson’s sword hit one of Handel’s large brass buttons and was snagged on it. Mattheson denies ever striking Handel, and calmly suggests “he was tall, strong, broad, and vigorous in body; he was, consequently, man enough to defend himself, and to make use of the sword which he had hanging at his side.” Whatever the case may be, cooler heads prevailed and the two composers quickly reconciled. Handel would eventually even cast Mattheson in the lead of two of his own operas. However, it was also patently clear that the city of Hamburg was not big enough for the two of them. Rather than trying to usurp Mattheson in his own hometown and getting stabbed again, Handel smartly made the decision to depart for London.