A Composer, Scholar and a Gentleman! 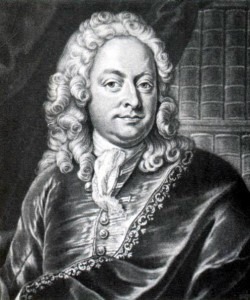 Take for example Johann Mattheson (1681-1764), a prolific composer, singer, organist, writer, lexicographer, diplomat, and music theorist. Born in Hamburg as the third, and only surviving son of a local tax collector, Mattheson displayed prodigious intellectual and musical talents at an early age. His broad liberal education included language studies in English, Italian and French, all of whom he spoke fluently. At age 6, he was not only considered a genius organist, he was also accomplished on viola da gamba, flute, oboe, lute, and violin. And let’s not forget his singing career! He became a member of the Hamburg opera chorus at age 9, and made his solo debut at the opera in a female role in 1696. After his voice changed, he sang tenor roles in his own operas, and conducted all rehearsals. Instead of bowing to his father’s wishes to study law at age 15, Mattheson decided that the opera itself was a kind of musical university, so he didn’t have to attend a real one. Daddy Mattheson, however, did not think that this kind of reasoning was very funny. So he marched to the opera house, tore up his son’s contract, and took him home. Young Mattheson later wrote that he “wept many bitter tears.”

Forced to study law, Mattheson nevertheless remained active in Hamburg’s “Goose Market Opera,” and became good friends with George Frideric Handel in 1703. Both journeyed to Lübeck to apply for the organist position at the Marienkirche vacated by Dietrich Buxtehude’s retirement. However, according to local tradition, in order to secure the job you had to marry the daughter of the outgoing musician. Once they took a good look at Buxtehude’s daughter, they quickly decided that they really were not interested in the job after all. By the way, J. S. Bach turned down the same position for the very same reason! By 1704, Mattheson was officially in the diplomatic service. First, he became the tutor of Cyrill Wich, son of the British envoy to Hamburg. Then he took a lifetime and highly prestigious appointment as personal secretary to Sir John Wich, and undertook a number of diplomatic missions abroad. A respected expert in Anglo-German trade and finance, Mattheson married Catharina Jennings, daughter of an English minister in 1709. His diplomatic activities, however, left him plenty of time for his beloved music. Relying on his vast experience on the operatic stage—he would publically appear over 2000 times during his lifetime—Mattheson started to author books on music theory and its practical applications in 1713. He also became music director of the Hamburg Cathedral in 1715.

The Hamburg Cathedral—and indeed elsewhere—strongly adhered to the Pauline rule of silence, suggesting that, “women should remain silent in church, for it is disgraceful for a woman to speak in church.” This of course meant, that women were not allowed to sing in church either. Mattheson, however, vehemently disagreed, and his writings in musical journals and newspapers sparked a controversial debate about the social significance of music. “I know that it cost a lot of trouble and annoyance to introduce female singers in the cathedral church,” he later wrote, “but when it comes to the beauty of music and to musical praise of god, so long as the musical ear is not injured, there is nothing to blame nor reject.” Jostling with orthodox clergy and reporters did not prevent Mattheson from prolifically composing in virtually all genres current at his time. The majority of his compositions were thought to have perished as the result of Allied bombing of the Hamburg Stadtbibliothek in World War II. Nobody knew that the Mattheson collection of manuscripts—as the proverbial spoils of war—had been carried East before the destruction of the church. To everybody’s surprise, it surfaced in Armenia in 1998, and has since been returned to Hamburg. While we are slowly getting to know a number of unknown Mattheson compositions, a large body of literary and theoretical writings, including but not limited to, the first German music periodical Critica musica (1722-25), the thoroughbass primer Grosse General-Bass-Schule (1731), Der vollkommene Capellmeister (1739), and the biographical lexicon Grundlage einer Ehren-Pforte (1740)—had previously been published in Hamburg. Commenting on nearly every aspect of music making, Mattheson is rightly regarded as the most important music theorist of the early German Enlightenment. In later years, increasing deafness led to social isolation, but he still managed to compose the oratorio Das fröhliche Sterbelied “The Merry Death Song,” for his own funeral.