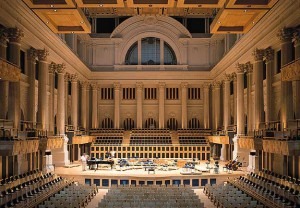 The main concert hall in Sao Paulo is housed in a converted train station. The station still works – it serves line 8, which crosses the city. As you approach it, in the decadent downtown area, Julio Prestes Station appears as a neo-classical dream among the faded facades of the surrounding buildings. It was built between 1926 and 1938 and operated mainly as a station until the mid-1990s, when the main building was converted into a musical centre and the grand hall into a concert hall, the Sala Sao Paulo. It is home of the fantastic Sao Paulo State Symphony Orchestra (OSESP). The story of its construction, as well as that of its renovation, offers a wonderful story of how music can make us travel.


In the mid-1920s, the Brazilian economy was at the height of its coffee-fuelled success and Sao Paulo was the main engine of growth, being located in the middle of coffee-producing country and being the main trading post in the region. It actually divided national power with Minas Gerais, the main dairy state, creating the amusingly-named “coffee-and-milk Republic”. The paulista coffee-barons lined the main avenues of the city with imposing villas and funded the construction of countless architectural jewels – few of which, sadly, still stand. It was in this spirit that architect Cristiano Stockler (later, interestingly enough, mayor of Sao Paulo) was commissioned to design a station to organise the flow of coffee coming from the countryside and being directed to the ports. The building he created eschewed baroque ornate design in favour of a more sober neo-classical, or neo-Louis XVI style. Grey stone columns line magnificently high windows and a clock tower rises high over a beautiful garden. It is a work of art, an oasis of calm and elegance.

In typical fashion, however, it took twelve years to be built and, by the time it was inaugurated in 1938, the atmosphere had changed significantly. The 1929 crash was catastrophic to the coffee economy and, coupled with the fast rise of cars and buses, initiated the decline of rail travel in Brazil. The station never really recovered, and neither did the railway company it served. In the following decades, as the country alternated between periods of growth and crisis, the company declined further and, in 1998, ultimately ceded the station to the State to pay off its debts. A lucky alignment of stars in politics and the musical scene in Sao Paulo lead to it being handed over to the State Ministry of Culture, which initiated the change from train station into concert hall.

The renovation was flawless. With bold ideas about the hall, architect Nelson Dupre set about transforming the grand hall of the station, which housed a winter garden, into a house of music. His attempt to maintain as much of the original design as possible, while maximising the musical potential of the room, created one of the world’s finest concert halls. As you enter the building, the elegant doors, tiled floors and decorated windows instil a sense of form and correctness, while the stone arcades and suspended walkways introduce rhythm and continuity. The discrete modern touches – the stairs, the walkways and the glass walls – refuse to blend into the original architecture, but are so light that they exist in a suspended state, almost floating their way through the temple of stone and sobriety that is the building. 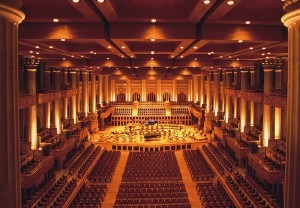 This tasteful co-existence between old and new is accentuated in the main hall, the Sala Sao Paulo itself. In there, the rows of seats and the balconies are covered in light-coloured wood. The stage sits surrounded by the stone columns, from amongst which the wooden private boxes emerge. High above the audience, the ceiling is composed of a series of wooden plaques which can be moved up and down to improve the acoustics, depending if the hall is hosting a large orchestra or an intimate recital. Everything from the density of the seats to the lack of carpet to the movable ceiling itself was thought of to improve the musical effect. And it worked: the Sala Sao Paulo is ranked among the best concert halls in the world for its acoustics, along with the Amsterdam Concertgebouw, the Vienna Musikverein or the Boston Symphony Hall.

But it is its essence as a railway station that appeals to me the most. The feeling that you are listening to music in a setting that was used to move coffee around, then to cultivate a winter garden strengthens the idea of music as travel. It is what New York’s Pennsylvania Station could have been, it is a musical counterpoint to the Grand Palais. In the old days, people would sit around there waiting for their trains, to be taken to other destinations. Today, we are also transported away – by the amazing playing of the OSESP, by its inspired directors and conductors and by some very inspired musical architects.