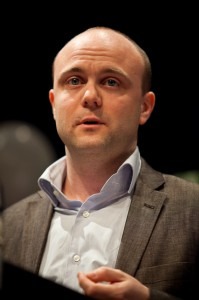 Young composer Ruben Naeff made a big move in 2011 when he packed his bags, left Amsterdam and settled in New York, where he became a full-time musician and moved in with his now-wife. That significant year became the inspiration behind his composition, JACKASS, which he will be bringing to the table this coming April at the Intimacy of Creativity held at the Hong Kong University of Science and Technology.

Spearheaded by Chinese-American composer Bright Sheng, the IC is in its fifth year running, successfully bringing together internationally acclaimed performers and young composers for creative dialogue and music-making. Composer-performer collaboration is an art that Sheng claims was prominent as far back as the 18th century but in disuse in the modern day. The annual project, running from 20 April – 3 May, 2015, hopes to revive this trend amongst the best in the music industry today.

When did you want to become a composer?

I think I’ve always created music or other things as a kid. I enjoyed playing piano, my own music but not so much other pieces. I’ve always liked making improvisations. So I think it was always there. I think the first piece I wrote down was when I was 15 or 16. There was also an opportunity in my high school to learn composing music and so that’s why it maybe started seriously.

What’s the biggest music collaboration you have done?

Back in New York University in 2010, my classmates and I were all very ambitious and we wanted to organize a lot of things. We named ourselves the West 4th New Music Collective because that’s the street NYU was based in. We are now exclusively just four people, and the last project we did, we wrote for an ensemble called Contemporaneous in New York. We set Moby Dick to music, and made it into an oratorio. We wanted to make the music like a dialogue. The individual movements were still our own, but they all related to each other, like a conversation.

[Collaboration] is a little painful always, because you have this great piece in your mind, but then your friends start bashing it. You don’t agree sometimes, and other times they’re right but you run out of time to make changes. But in the end Moby Dick was extraordinary. When I saw it all together, with all the voices and the other pieces, I was really impressed with what we did, even without knowing. The openness definitely helps.

You applied to the IC every year since it first started. Why were you so keen to be part of the project?

What I liked about it was the opportunity to work on your piece and have it performed more than just once. There are many great programs out there, but rehearsals may be sparse because people are busy doing other things. Here, it’s intense because you hear your piece, talk about it, revise, and hear it, talk about it, revise. It’s extraordinary. That’s the biggest reason. Another reason is because I’m drawn to Hong Kong. I’ve never been to Hong Kong or remotely close to there. I’m curious as to how people think musically, and also generally how the culture is.

Your programme notes for JACKASS is very short. Can you tell us more about the piece?

It’s my shortest programme notes ever. My first draft was a full page, which was ridiculous so I had to shorten it. Then I started shortening it more and more, and in the end all I wanted to say was said in one sentence. There’s a twelve-tone scale, but it’s not atonal, and you can definitely hear the harmonies. It’s all very exciting, like a roller coaster, or a car chase.

Often you don’t know what inspires you at that moment. It’s only later when you think about it that you realize it’s something in your life that caused your music, in a way. I wrote this piece in the winter of 2011, when I had been in New York for barely half a year. I moved here because I met a woman who is now my wife. I quit my job and went into music full-time. So there were big changes in my life and I think you can hear all that in the piece. It’s very exciting, very fast. It’s very playful. It’s an adventure but it’s still sticking to something I love.

I wrote it for the Jack Quartet, and I thought they were amazing so why write easy music, right? It was my chance to make it as hard as I want to, and they have to play it. While I was writing it I started to realize that it got harder and harder. One bar of hard music is one thing, but it was like eight minutes of hard music. When I had to think of a title, I thought, what about JACKASS? They were the Jack Quartet, and I’m kind of a jackass for writing such hard music for them. It also means donkey right? It jumps a little bit, it’s very energetic, and so that was how it came to existence.