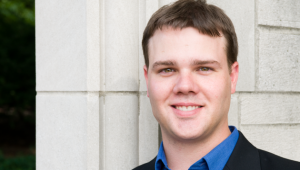 Clint Needham has a knack for finding interesting material and inspiration in all kinds of places, and it is no wonder the New York Times has described his music as “wildly entertaining” & “stunning… brilliantly orchestrated”. The young composer from Texas wrote When We Forget in 2011, a moving work about Alzheimer’s, in tribute to his grandparents, who both suffered from the chronic disease. Needham also tackled campaign rhetoric in Chamber Symphony, performed by the American Composers Orchestra in 2008, skillfully capturing both the hopeful and sardonic spirit of presidential race. In 2011, Needham was so inspired by a Chihuly sculpture he saw at the Joslyn Art Museum in Omaha, that he wrote an 8-minute orchestral piece for the Sioux City Symphony.

For the upcoming Intimacy of Creativity at the Hong Kong University of Science and Technology however, Needham’s inspiration came from a Jack Kerouac novel. “I was serendipitously re-reading Jack Kerouac’s novel On the Road when I started writing the work,” Needham revealed. “The two main characters, Sal and Dean, are represented by the solo instrument voices, the clarinet and the violin.”

The trio version will be premiered for the IC, a project spearheaded by renowned composer Bright Sheng, who wanted to revitalize creative dialogue and collaboration between internationally acclaimed performers and young composers. Previously having written two versions of the piece, for solo clarinet and piano, and solo violin and piano, Needham finds the idea of being able to make great changes to his work during the rehearsal period of IC a “luxury”. “Typically the initial performance of a piece of music takes place with almost no opportunity to make chances during the rehearsal process,” he said. “The revision part almost always takes place after the fact, so the first performance is rarely my ‘real’ vision for the work.”

But being able to work with performers and make changes to one’s work during the rehearsal process is “an ideal scenario”, Needham said. One of his most memorable collaboration experiences was with the Orpheus Chamber Orchestra. “Going into that experience I was a bit uneasy about working with a conductor-less orchestra,” he said. However, it wasn’t long before Needham found himself experiencing one of “the most remarkably synergistic musical rehearsals” in his career.

“Everyone had ideas about my music, they all knew it beyond their own part and they all engaged me over several days during the rehearsal process,” he said. “It was really a dream situation in terms of working with an orchestra.”

The IC experience will largely have a similar vibe, since the composers are required to edit and revise their work significantly one week prior to its premiere, after receiving input from performers. Needham will be working and taking advice from acclaimed clarinettist John Bruce Yeh, violinist Sarah Silver from the Tanglewood New Fromm Players, and Fellow Composer and pianist A-mao Wang, who will then perform the new version on April 26 at the Hong Kong City Hall.

Needham received his music education from Indiana University, where he was a four-year Jacobs School of Music doctoral fellow in composition, and from the Baldwin Wallace Conservatory of Music. He recently served as the Music Alive Composer-in-Residence with the Albany Symphony and will be back in Albany this season as the Andrew W. Mellon Composer/ Educator-in-Residence. His music has been recognized with numerous awards including the International Barlow Prize, Charles Ives Scholarship from the American Academy of Arts and Letters, and the Jacob Druckman Prize from the Aspen Music Festival.