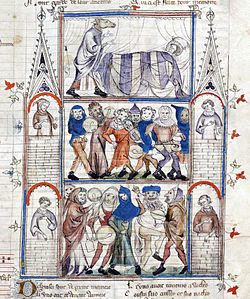 The Roman de Fauvel is an early 14th-century satirical poem preserved in a beautifully decorated manuscript. Attributed to Gervais de Bus, a clerk at the French royal chancery, the narrative is divided into two books. It details the rise of the fallow-colored and foolish horse “Fauvel” to prominence in the French royal court. Satirizing the hypocrisy of men and the excesses of the ruling estates, both secular and ecclesiastical, the antihero’s name forms an acrostic with each letter representing one of the human vices: Flattery, Avarice, Vileness, Variability, Envy, and Laxity. It is telling that the Fauvel originated at a time when France was under the notorious rule of Philippe IV, also known as “The Fair.” The king had not only relocated the seat of the church from Rome to Avignon, but was also responsible for conducting a brutal campaign of annihilation against the Order of the Knights Templar. As such, the Fauvel allegory is highly critical of the king, the Pope, the church, and practically the whole of French society of its day. 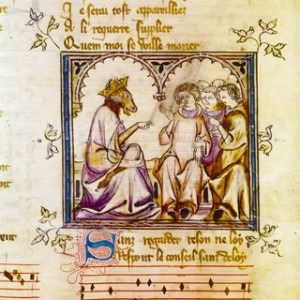 The first book in this 3000-line poem is a rebuke against the clergy and a society tainted by sin and corruption. By the grace of the goddess of Fate, the foolish horse Fauvel has decided that he is dissatisfied with his stable dwellings and moves into the largest room of his master’s house. He changes his residence to suit his needs, and a custom manager builds him a hayrack. Fauvel is quickly appointed leader of the house, and church and secular leaders make pilgrimages to see him. In his wardrobe, which actually serves as his toilet, members of various religious orders clean him up so that “no dung can remain on him.” Foreign potentates brush and clean Fauvel from his tonsured head to his tail. In the second book, Fauvel travels to Macrocosmos and he asks for Lady Fortuna’s hand in marriage. She turns him down, but suggests that Fauvel should marry Lady Vainglory. When Fauvel agrees, Flirtation, Adultery, Carnal Lust and Venus are invited to witness the festivities. In the end, Lady Fortuna reveals Fauvel’s role in the world. He is to give birth to more rulers like himself, and as a devout follower of the Antichrist, he will eventually bring about the end of the world. 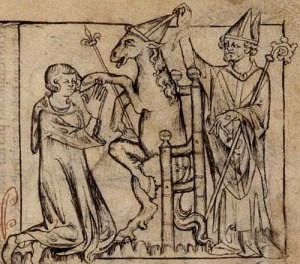 The Roman de Fauvel is not merely a lavishly decorated satirical poem. It is also a beautiful musical manuscript! In all, it contains 169 pieces of music. The majority of Fauvel pieces are monophonic, including settings of the poetic verse forms rondeaux, ballads, chansons and a variety of plainsong. However, the manuscript also contains thirty-four polyphonic motets. These masterworks of early polyphony provide the initial examples of a musical unifying device called isorhythm. It’s all a bit complicated, but it basically means that the tenor voice functions as the foundation of the entire polyphonic structure. It does so by arranging time values in a repeating pattern. This remarkable musical collection provides us with a superb anthology of the music of the thirteenth and early fourteenth centuries. There is also the suggestion that the manuscript might have been intended as a theatrical performance. If you really think about it, the theater of incompetent governments, rulers and clergy has certainly never gone out of style!