Artists Behind the scenes
How to recover gracefully
by Maureen Buja December 13th, 2017 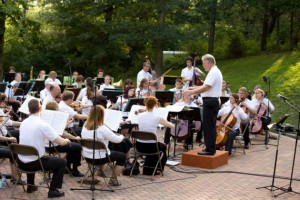 I was at a performance of Mahler’s Fourth Symphony the other night and when we came to the final movement, things were a bit odd. The soprano walked out while the orchestra was playing, sort of stood around for a while, sat down, stood up to sing, sat down in the middle, and then walked off before the final verse, holding onto the musician’s chairs. The majority of the audience didn’t know the piece, but for anyone following along in the program, this was a puzzlement. Apparently, soprano wasn’t feeling well before the concert and had the musical sense to leave when the music would permit. It was interesting, however, to hear the orchestra part without the normal soprano part.

Mahler: Symphony No. 4: IV. Sehr behaglich (Renée Fleming, soprano; Berlin Philharmonic Orchestra; Claudio Abbado, cond.)
These kinds of things happen – music is made by people, after all. Outdoor concerts can be the worst. One concert I attended had to be called off for rain – the concert band was ready to play, but the rain washed the music off the pages, literally. The trumpets and trombones suffered from excess water in their instruments and the clarinet reeds just seemed to go all floppy. It was one case where a strategic retreat was better than that show going on!

The problem of mobile phones in concert halls seems to be a continuing problem these days and a number of solutions have been found by performers: stopping the performance and shaming the malefactor, incorporating the ringtone melody into the performance, or just continuing on while the person’s seatmates take care of the problem. At least we no longer have the problem of digital watches that sound the hour and which no one ever seemed to be able to turn off!

Recently, in a concert in London, the London Symphony Orchestra’s oboist made the fastest oboe switch in the world when, in a performance of Berlioz’ Damnation of Faust, in trying to get a water bubble out during a rest, he split his reed – he quickly borrowed his neighbor’s oboe and made the next entry in perfect time. His neighboring player, being given the non-working oboe, put on a new reed for him and traded back for the next entry.

That has to be one of the most graceful recoveries we’ve ever seen – invisible to the audience and yet, if you had your eye on the right player, a wonderful behind the scenes move.