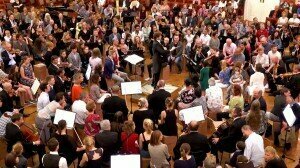 The name ‘Im Klang’ says it all. The audience is seated ‘in the middle of the sound’. The players of the Wiener Symphoniker take leave of their traditional places on the concert platform and spread themselves widely throughout the empty Parterre of the hall.

Wiener Symphoniker has been holding the “Im Klang” series, with the most recent concert being a performance of Stravinsky’s The Firebird conducted by Gustavo Gimeno on 25th June, 2018:

Innovative though it may seem, this setting has huge limitations, leading to unsuccessful musical outcomes (not to mention the standard of the playing itself, which was mediocre at best). One prominent problem is the balance. One could imagine how the sound would be when sitting next to the brass section (especially for a piece like Firebird) – one could only hear the deafening brass section, which overpowered other instruments. Even though I was sitting next to the violins, since it was too close to the brass section, the chords at the end were not balanced at all. A lot of nuances and musical details could not be perceived by the audience. Despite some luscious moments, the music simply did not sound right at times, such as with harmonic glissandi being too loud (so that the somewhat eerie atmosphere was lost) and the sound being too dense.

The second problem in the realisation of the idea “Im Klang” is the elevated stress level of the players. Imagine, when you are playing the violin, there is one person staring at your fingers, one gazing at you, and another one looking fixedly on your bow… While some players seemed to enjoy the presence of audience in close proximity to them, some inevitably looked stressed, tense and red-faced (particularly when they missed a cue). The extra mental pressure caused by this setting somehow adversely affected the quality of the performance. 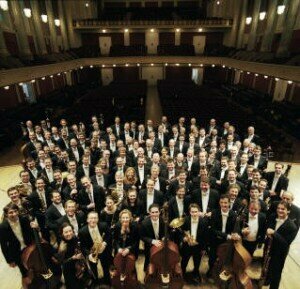 This new concert format also poses challenges to the conductor. Gimeno himself admitted that conducting in 360 degrees was a new experience for him, while the presence of audience among the players made it even harder for him to recognise each section immediately and give cues accurately. Moreover, presumably to accommodate more people in the hall or to create a more casual atmosphere, paper boxes, instead of regular seats, were adopted. This, however, caused both discomfort and noise when the audience was adjusting their posture at quieter moments of the music, which was quite distracting to be frank.

Undoubtedly, this “Im Klang” series is creative and may help classical music reach out to younger audiences. However, when a composer composes, which one is in his or her mind – the sound perceived by the audience or that perceived by the orchestra members? When a composer attends a rehearsal of his own piece, will he sit at the centre of the orchestra in order to perceive the musical effect, sound projection and balance? This is not an attempt to defy all the efforts put by both the orchestra and administration, but they should really be more aware of the drawbacks and limitations of this idea in reality, and avoid being too idealistic while ignoring the practical concerns.