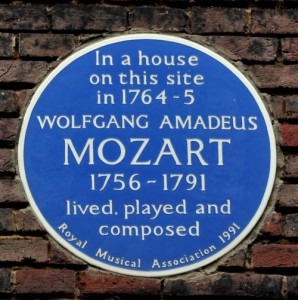 As you walk around the cities in Europe, read the walls. In London, Blue Plaques tell you about the famous people who lived in ‘a house on this site.’ If you’re at 20 Frith Street in London, look up for this memorial to Mozart:

If you’re in Paris, many of the signs you’ll see are memorials to Parisians killed during the last days of the German occupation of Paris, but when you look higher up on the walls, other memorials emerge. In the 6th arrondissement, on the rue de Condé, you’ll find this notice of the birth of the mezzo-soprano Maria Malibran:

On the parallel street, the rue Monsieur le Prince, you’ll find this notice for the residence of the composer Camille Saint-Saëns.

This started us thinking about what music he composed here, just in the shadow of the Sorbonne. He wrote 4 operas, three of which received their premières in Paris; the incidental music for a play that sounds positively contemporary, Nina Zombi; a lot of sacred music, including his Requiem; much choral music; the Suite Algérienne and his Symphony No. 3; his third violin concerto and his first violin sonata, and, most famously, The Carnival of the Animals. The 12 years he lived on the rue Monsieur le Prince were very productive for him. 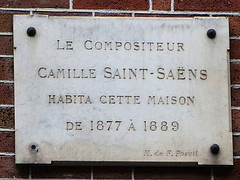 Saint-Saëns: The Carnival of the Animals: XI. Pianists (chamber ensemble, Gennady Rozhdestvensky, Cond.)
Over on the boulevard Saint-Michel, we find the house where César Franck lived for his last 25 years.

On the right bank, we find evidence of Lizst’s time in Paris, where he “was welcomed” by the family of the famous piano-maker Erard. This address, at 13 rue de Mail, was the headquarters of the piano firm from 1781 until the firm closed in the mid-20th century. When the 12-year-old Liszt first came to Paris in 1823, he was at the end of a piano tour that had started in Vienna and had stopped for concerts in Munich, Augsburg, Strasbourg, and Stuttgart, following the same path as Mozart 60 years earlier. The stage coach trip ended at the rue de Mail, near the Erard headquarters, and the young virtuoso was welcomed by the Erard family. 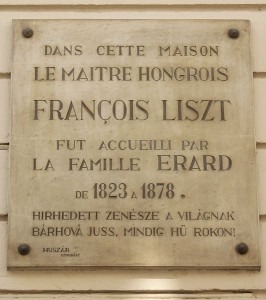 The head of the firm, Sébastian Erard, gave Liszt one of his new pianos with his newly invented ‘repetition action’ and Liszt immediately set to writing music that exploited its new possibilities for very quick note reiteration. 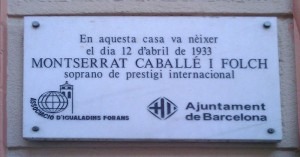 In Milan, you can find this plaque for Arrigo Boito across the street from the American Consulate on via Principe Amedeo. Boito was a composer, but it was his work as a librettist with Verdi that we best remember him today. 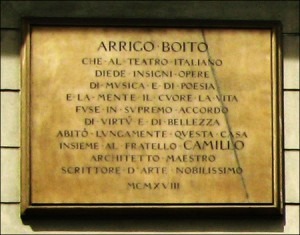 His last opera with Verdi was Falstaff, which ends with this wonderful verbal fugue.

Verdi: Falstaff: Act III: Tutto nel mondo e burla (Dietrich Fischer-Dieskau, Falstaff; Vienna State Opera Chorus; Vienna Philharmonic Orchestra; Leonard Bernstein, cond. )
As you travel around the world, look on the walls of the cities where you’re exploring – you might find reminders of how music is so important to the life of a city.