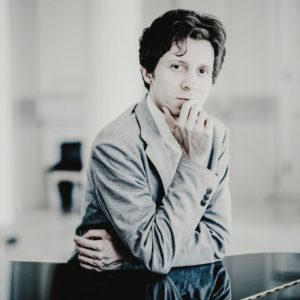 Polish pianist Rafał Blechacz, laureate of all the five first prizes in Chopin piano competition in 2005 at the age of 20, gave a compelling recital in Taipei with a programme of Mozart, Beethoven, Schumann and Chopin.

Blechacz’s Mozart Rondo in A minor, K.511 had flair, elegance and composure in its execution, showing well-considered phrasing with dynamic shadings. Mozart’s music has always been notoriously known for its interpretive difficulty in spite of the seeming technical simplicity. Blechacz’s playing was nuanced and articulated, while displaying restrained bleakness and desolation. Meanwhile, the simplicity of the music per se was preserved with a clear sense of architecture.

His Mozart Sonata in A minor, K.310 was convincing as well. Consistent with the previous piece, his playing was well thought-out with strong technical facility. It had the agitation, rhythmic vigour and varied articulation that the piece required, together with a nice balance between impulsivity and rationality. The cantilena of the second movement was played with vocal quality and operatic character, benefitted by an enticing tone production. However, the emotional depth and drama in this sonata was not fully exploded, in particular in the second movement – his interpretation here sounded bland to me.

It was evident from the Mozart pieces that the National Concert Hall at Taipei had a rather long reverberation time. At times the notes were blurred even without the use of pedal, and this inevitably affected clarity of lines.

Beethoven Piano Sonata in A major, Op.101, characteristic of his late piano sonatas, had intimacy and refined dynamic gradations from Blechacz. The march-like second movement was executed with angularity, strength and clarity (notably in the canonic passage), coupled with a full-bodied tone. The finale, on the other hand, contained excitement and propulsive energy, while the central fugato was treated carefully.

At the outset of Schumann’s Piano Sonata No.2 in G minor, Op.22, with the first movement indicated as “So rasch wie möglich” (As quickly as possible), uneasiness, impetuosity and anguish were expressed in Blechacz’s rendition. The satirical sense of humour of Scherzo was communicated; the technical demands of the finale were tackled with ease. Nevertheless, more of the bipolar and neurotic nature of Schumann’s music and expressivity were expected. Again, his playing here was rather insipid (like his Mozart), albeit technically assured.

Then, it came to Chopin’s four mazurkas, Op.24, which, despite their brevity, I felt to be the highlight of this concert. His performance had authenticity and sensitivity with subtleties fully revealed. The first mazurka conveyed żal (an untranslatable word from Polish, which describes nostalgia, sentiment, suffering and much more) and poignancy; the second one depicted a gorgeous scene with a rustic setting of a circle of couples dressed in Mazovian costume – pure bliss and pleasure! Essentially, the light and shade of the fourth mazurka, with intertwining of materials, were also effectively conveyed.

Blechacz then gave a fiery account of Chopin’s well-known “Heroic” Polonaise with verve, grandeur and nobility. A strong rhythmic drive and technical rigour was maintained throughout, with the imitation of winds by the right hand above the bass ostinato in the central section.

With thunderous applause, Bach’s Jesu, Joy of Man’s Desiring (transcribed by Myra Hess) was offered as encore. It received a contemplative reading from Blechacz with imitation of organ and some beautiful voicing, bringing the recital to a satisfying conclusion.

There was some technically accomplished playing from Blechacz, but imaginative power and musical imagery were somewhat missing especially in Mozart – I would personally expect more character in his performance. That being said, his Chopin had eloquence, musicality and, in fact, much to say.