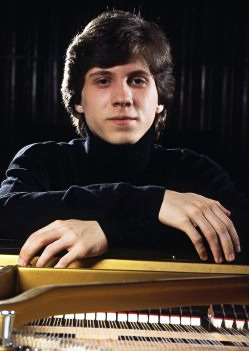 In October 2005, the name of Rafał Blechacz swept across the world of classical music, with his exceptional winning of all five 1st prizes at the 15th International Frederick Chopin Piano Competition in Warsaw, including the Polish Radio Award for “Best Performance of the Mazurkas”, the Polish Chopin Society Award for “Best Polonaise”, the Warsaw Philharmonic Award for “Best Concerto”, as well as the prize founded by Krystian Zimerman for “Best Sonata”.

Born in 1985 in Nakło nad Notecią, Poland, Rafał began his piano lessons at the age of five, and continued in the Artur Rubinstein Music School in Bydgoszcz. In May 2007, he graduated from the class of Professor Katarzyna Popowa-Zydroń at the Feliks Nowowiejski Academy of Music. Throughout the years, Rafał has won in various contests, for example, the International Young Pianists Competition “Artur Rubinstein in memoriam”, and the Hamamatsu International Piano Competition.

With his victory in 2005, Rafał has been performing with many prestigious orchestras, such as the Royal Concertgebouw Orchestra, New York Philharmonic, Orchestre National de France, Berlin Radio Symphony Orchestra, Tokyo Symphony Orchestra, Russian National Orchestra and Warsaw National Philharmonic, just to name a few. Rafał has also been invited to perform in the most renowned music festivals, including Salzburg, Verbier, La Roque-d’Anthéron, and Gilmore.

In 2006, Rafał signed an exclusive contract with Deutsche Grammophon, and has become the second Polish pianist, after Krystian Zimerman, that has been enlisted under this prestigious label. His first CD, which contains all Preludes by Chopin, attained the Platinum Record status in Poland as early as in the second week of sale, and has won the German Echo Klassik and French Diapason D’or. The pianist honored the Chopin Year 2010 with both the composer’s Concertos recorded with the Royal Concertgebouw Orchestra; upon release, the CD quickly reached the double Platinum Record status in Poland, received the Preis der Deutschen Schallplattenkritik, and was listed by Gramophone as “World’s No. 1”.